On Tuesday, Tesla (TSLA) reached the milestone of attaining a market cap of over $200 billion.  Just one day later it tacked on another $7.5 billion in market cap surpassing Toyota for the highest valued global automobile manufacturer. With another boost today after the company reported a big beat on second-quarter deliveries (90.65K vs estimates of 72K), the stock is up at all-time highs crossing $1,200/share making for a market cap of $237 billion. Meanwhile, Toyota is valued at $205 billion in dollar adjusted terms. That makes TSLA the eleventh largest market cap in the Nasdaq 100. 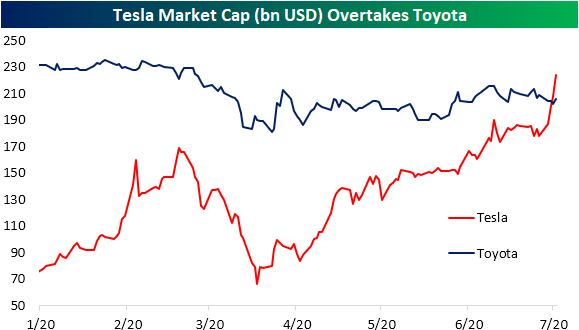 As shown in the chart below, since Tesla IPOd just over a decade ago, it has consistently been taking up a greater share of the total market cap of global automobile makers.  And in the past year, TSLA’s share has skyrocketed.  TSLA now accounts for more than a quarter of the total market cap of the 19 largest automakers in the world. The only other automaker that has been able to boast that at any point since TSLA IPO’ed has been Toyota. 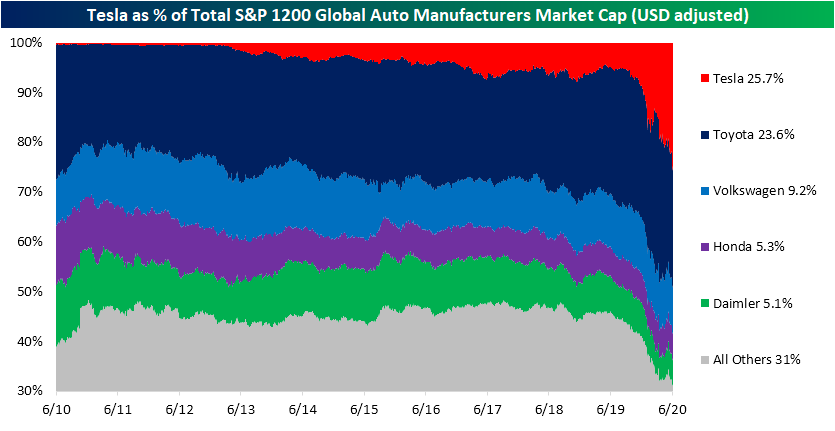 In the table below, we show all 18 stocks in the S&P 1200 Global Automobiles index in addition to Tesla and their YTD change, market caps, and 2019 sales as well as the latter two as a percentage of the total for the group.  As shown, other than Tesla only Italy’s Ferrari is up on a YTD basis.  But the two stocks’ performances are hardly comparable as TSLA has risen 188% and Ferrari has not even gained 5%.  Even though both stocks are sitting in the green in 2020, they account for an extremely small share of global automobile revenues. The two companies combined still account for roughly 1.5% of total revenues of these companies.  By comparison, Toyota who has the most similar market cap to Tesla accounts for 14.7% of all sales.  Click here to view Bespoke’s premium membership options for our best research available. 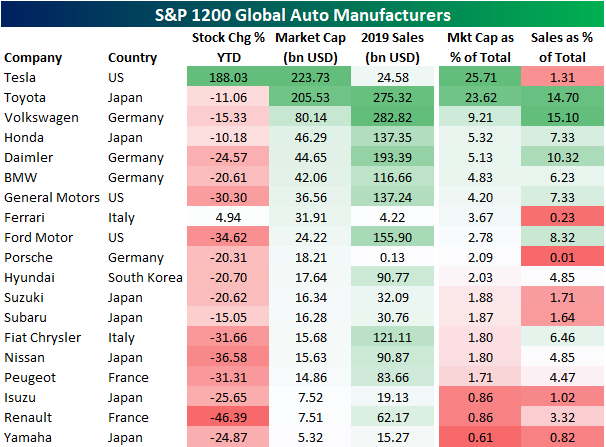