One catalyst being given credit to the generally positive performance equities today were bullish comments in a CNBC interview with Appaloosa Management’s David Tepper. Tepper stated that in his view “rates have temporarily made the most of the move” and ” “it’s very difficult to be bearish.” Tepper also stated a belief in the possibility of Japan stepping in as a buyer for US Treasuries following the recent rise in yields.  As for why exactly Japan doing so would benefit Treasuries, it should be noted that Japan is the largest foreign holder of US Treasuries (per Treasury International Capital TIC data).  As of December data (January data is set to be released next Monday, 3/15), Japan held $1.25 trillion in Treasury securities.  The only other country that comes even close is China with $1.072 trillion in Treasury holdings.  Behind those two, the UK is the next largest holder with not even half that amount: $440.6 billion. 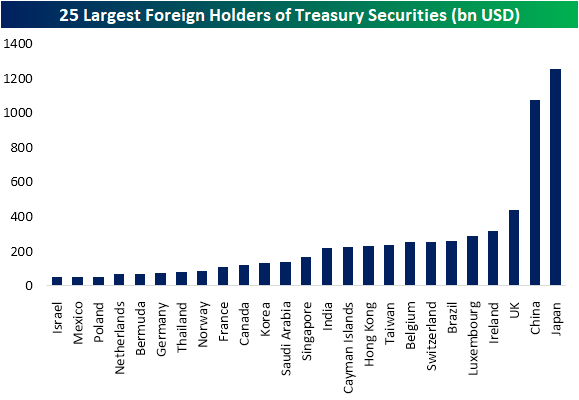 Using the same TIC data, from early 2015 through the end of 2019, Japan was a net seller of US Treasury and Federal Financing Bank securities.  For most of 2020, that had changed with Japan becoming a net buyer though that waned towards the end of the year. The recent uptick in yields coincided with Japan returning to being a net seller. 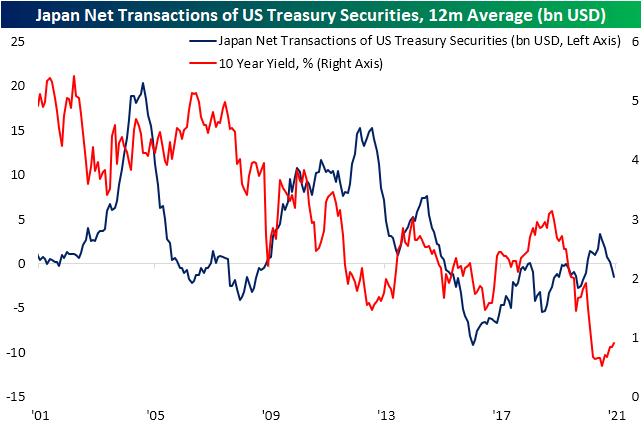 While Japan has purchased fewer Treasuries, they have still been making up the difference as big buyers of MBS. According to the TIC data for December, positive flows of MBS purchases offset the decline in Treasury purchases. As for Japanese data with less of a delay, in the chart below we show weekly net purchases of all foreign bonds and notes in US dollar terms summed by month. As for this more high-frequency data, again, there has yet to be evidence that Japan is buying Treasuries. For the month of February, the country was a net seller of $19.6 billion in foreign bonds and notes.  But Click here to view Bespoke’s premium membership options for our best research available. 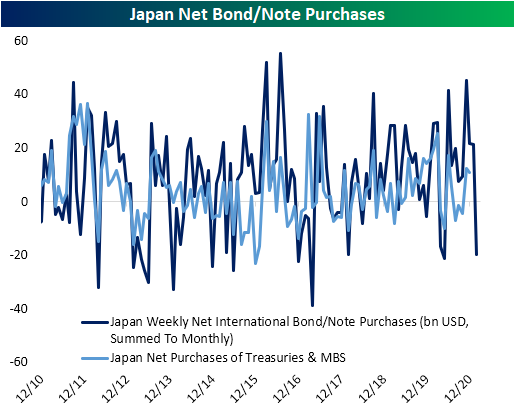