It has been quite a tumultuous four months for the Technology sector.  The chart below shows the cumulative performance of the S&P 500 and the Technology sector over the last year.  From late February through early October, the performance of the two were basically in line with each other, but beginning in October, tech took off while the rally in the S&P 500 was much more muted.  At one point in December, the performance spread between tech and the S&P 500 from 2/23/21 widened out to just under ten percentage points.  In the span of just about two months, though, that entire spread has evaporated and the S&P 500 is actually outperforming tech over the last year.  Maximum bullishness in technology came late last year, but as tech has hit the skids this year, investor sentiment is starting to follow suit. 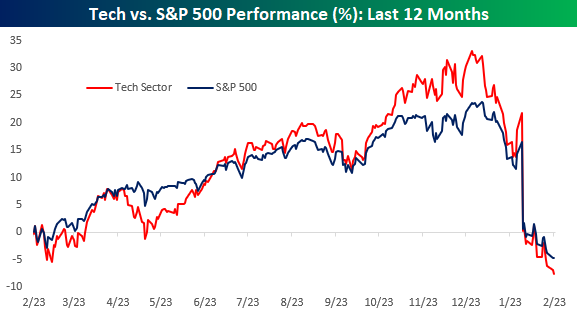 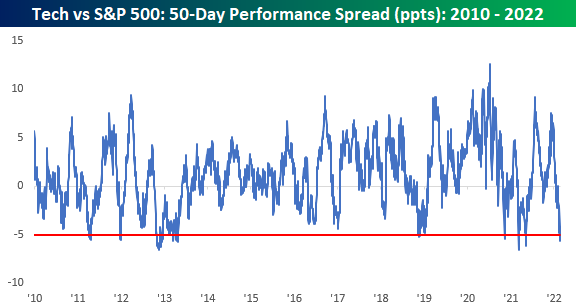 Looking at the above chart, periods like the last 50 trading days where tech underperformed by such a wide margin appear uncommon, but taking a wider angle view shows that it hasn’t always been this way.  The chart below is the same one as the above but goes all the way back to 1990 rather than 2010.  While the performance spread between tech and the S&P 500 has been relatively narrow to both the upside and downside in the last 15 years or so, prior to 2005, the range of out or underperformance was routinely in a wider range back then compared to the range it hasmoved between since 2005. Click here to view Bespoke’s premium membership options. 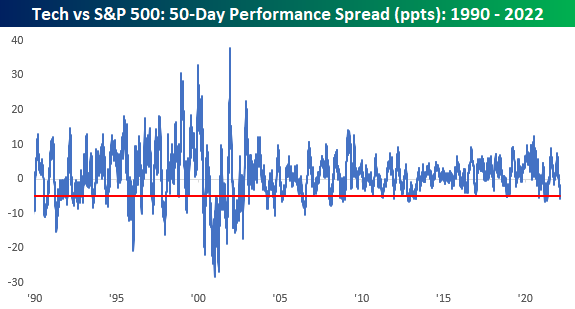