As equities run to all-time highs, valuations are at a fairly interesting point.  As shown in the chart below using data from our Daily Sector Snapshot included with our Morning Lineup and The Closer, most sectors’ valuations are at the upper end of the past ten years’ range. Four sectors, Consumer Discretionary, Communication Services, Utilities, and Technology all have trailing P/E ratios in the 90th percentile or higher of the past ten years’ readings.

Since the S&P 500 established its first all-time high since July on October 28th, Health Care and Financials have been two of the strongest performers rising 6.68% and 4.35%, respectively.  Despite these runs, both of these sectors still have reasonable valuations relative to the past decade. For Financials, the current trailing price-to-earnings ratio is in the 42nd percentile of all days of the past ten years. No other sector has such a low reading although Materials and Energy are on the lower end relative to other sectors. On the other hand, Utilities and Technology have some of the highest valuations of the past ten years with the current P/E in the 97th and 99th percentiles, respectively. 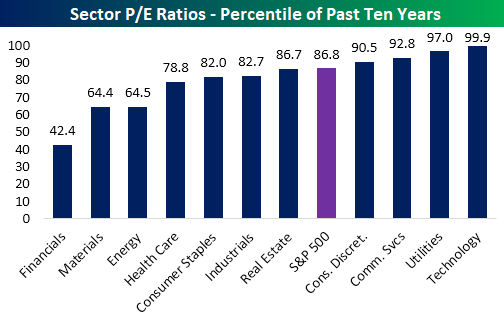 As shown in the chart below, most of the last 9-12 months has seen valuations for Utilities consistently in the uppermost range of the past ten years as investors chased yield in a low interest rate environment. But as risk-free rates have risen more recently, valuations for Utilities have pulled back a bit as price has slid. While there have been other periods in the past ten years where Utilities’ P/E ratio was similarly elevated, arguably only 2016/2017 saw it remain at the upper end of the ten-year range as consistently as has been the case this year.

For Technology it is a whole different story. The P/E for the sector got crushed this time last year and after plummeting to the 31st percentile, it is has rebounded to the highest levels of the past ten years.  The only other time that the sector traded at a similar premium relative to the past decade’s range was back in early 2018. Sign up for Bespoke’s “2020” special and get our upcoming Bespoke Report 2020 Market Outlook and Investor Toolkit. 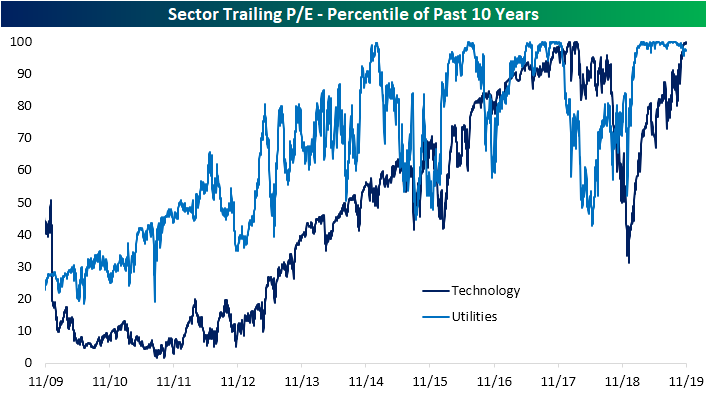