As we noted in an earlier post, issues that businesses are reporting to be their biggest problems stayed mostly the same in November.  Of the ten problems that are surveyed, half were unchanged month over month. But those that did change give some interesting insights into the current status of the economy. For starters, as small businesses report that they have difficulty hiring (which we detailed in more depth here) nearly a quarter of all responding firms cite quality of labor as their biggest single issue.  That was up two points from last month and is in the 97th percentile of all readings.  Current levels are actually right back to where things stood right before the pandemic began. Of all single issues, this is the biggest problem for businesses.  While quality of labor became a more widely reported issue, fewer responding firms reported the cost of labor to be their biggest problem (6% in November vs 8% in October).  Given the two canceled each other out, the same percentage (30%) of companies reported either cost or quality of labor as their biggest issue in November as has been the case every month since August. 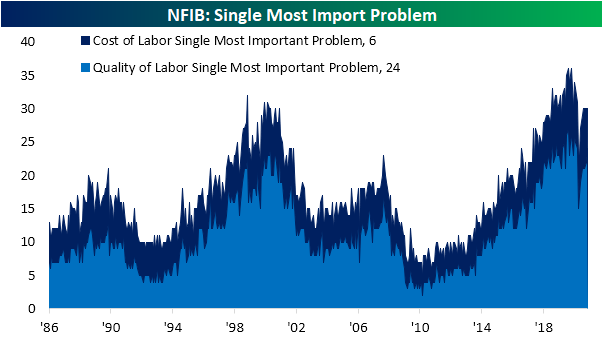 Of the other issues, poor sales and competition from big businesses are two other single issues that weigh heavily on the minds of small businesses with 13% and 9% of firms, respectively, reporting these as the biggest issues.  While that is still an elevated reading for poor sales, it is off the peak of 19% earlier this year.  Meanwhile, inflation, interest rates, insurance, and “other” were of less importance in November with the latter two of these both falling month over month in November. On a combined basis, only 14% of firms report one of these to be the biggest problem. 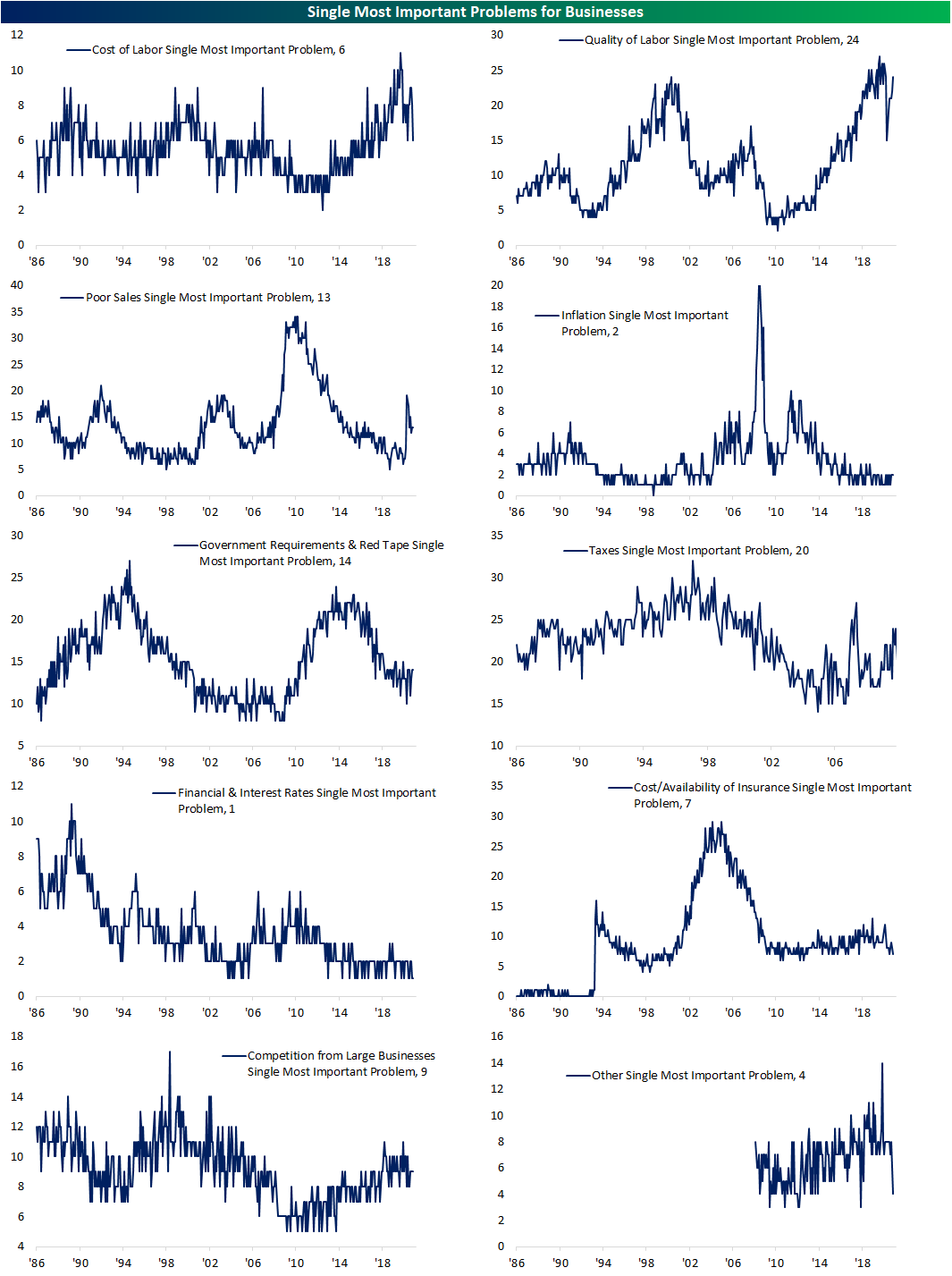 That leaves government red tape and taxes. In the wake of Biden’s victory, the share of companies reporting taxes as their biggest issue rose by 3 percentage points to 20%.  That is the highest share of respondents reporting this as their biggest problem since the end of 2017; right around the time of the Trump tax cuts.  Including the share of respondents that report government red tape and requirements, which was unchanged at 14% in November, more than a third of small businesses now report government-related issues to be their biggest problems.  That uptick in the combined reading was not any sort of record but was nonetheless significant in the top 20% of all monthly changes.  Perhaps more important, it marks a potential trend reversal in what businesses view as their biggest problems.

While Republican administrations are typically viewed as more business-friendly than Democratic ones and vice versa, that has not necessarily been the case historically. Namely, George H.W. Bush’s term saw taxes and government requirements become more of a concern among small businesses before that was reversed in the Clinton years. But most of George W. Bush’s tenure up through Trump’s time in office, the moves in the percentage of small businesses reporting government-related issues as their biggest problems have been more consistent with the aforementioned statement.  Most of President Obama’s time in office saw taxes/red tape become a growing concern with a big reversal in the trend once Trump’s tax cuts came to fruition in 2017. With Obama’s VP now set to take office, it begs the question if the same trend from 2008 through 2016 is set to return. 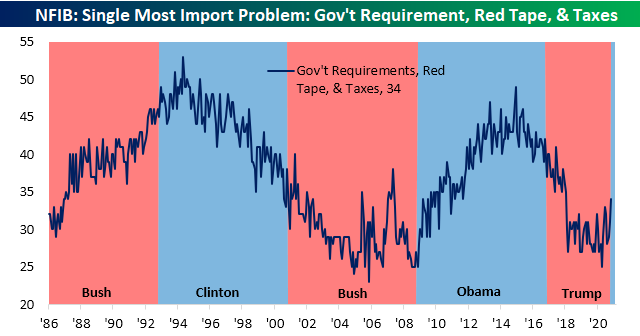 Time will tell if the uptick in the most recent month is the early stages of a new trend, but it could also more generally come down to overall policy uncertainty which remains elevated as could be expected with stimulus talks still ongoing and a new administration around the corner.  In the chart below we show the NFIB’s reading on Economic Policy Uncertainty.  Headed into the election, October’s reading of the index spiked to the second-highest reading on record.  So what was the higher reading? It came in November of 2016 just after the presidential election.  With the 2020 election now more or less in the rearview, November’s reading on uncertainty has taken a turn lower dropping from 98 down to 90, but that is still in the 98th percentile of all prior readings.  Start a two-week free trial to Bespoke Institutional to access our interactive economic indicators monitor and much more. 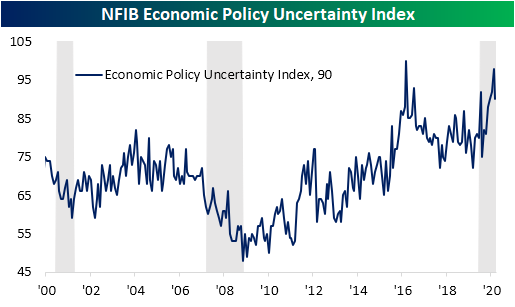