Tax Day Cometh. Wait. What Month is This?

It may be July but due to the government shutdowns this Spring, the Federal deadline for filing taxes was delayed by three months.  With that in mind, the table below summarizes the performance of the S&P 500 in the weeks leading up to and after the Federal tax deadline over the last twenty years.  Obviously, the major caveat is that the performance numbers shown from prior years are for the month of April, while this year is the only time the deadline has been in July.

While returns leading up to the tax deadline haven’t been anything special, returns one and two weeks after the tax deadline have been much stronger than average.  One week after the Federal tax deadline, the S&P 500 has averaged a gain of 0.87%, and two weeks later the average gain has been 1.50%.  The market has also been pretty consistent to the upside in the days after tax day as the S&P 500 has been up three-quarters of the time.  Americans were reportedly quick to put their stimulus checks into the market back in the Spring, so will they double-down with their refund checks?  Like what you see? Click here to view Bespoke’s premium membership options for our best research available. 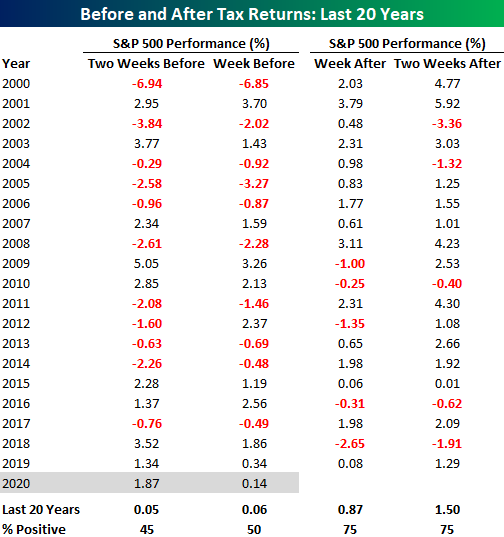