Target Nearly a Double With a Below Market Multiple

Even before today, 2019 had been a great year for Target (TGT).  While many retailers have succumbed to the forces of gravity, TGT was up over 65% YTD through yesterday’s close.  After this morning’s earnings report, though, TGT is up another 14%, taking its total YTD gain to over 95%, or nearly a double!  Looking at the chart below, there have been a number of gaps higher in the stock this year, and that’s because much of the stock’s gains have come in reaction to earnings.  For example, of the 60 points that the stock has added to its share price this year, 42 of those points have come on the four days that the stock reported earnings! 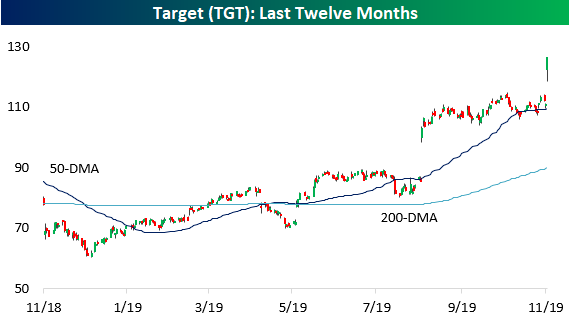 The table below lists the 23 stocks in the S&P 500 that are up by more than 50% YTD and still have below market multiples.  Topping the list are two semiconductor stocks – Lam Research (LRCX) and KLA Corp (KLAC).  Given their cyclicality, semiconductors often trade at below-market multiples, so the fact that they are trading at near-market multiples suggest that they aren’t cheap right now.  Bulls would counter that the sector has become less cyclical as evidenced by the relatively shallow down cycle the sector saw last year.

Right above TGT, another notable name is Xerox (XRX).  Even after the stock has essentially doubled this year following a takeover offer from HP, it still trades at less than 10 times earnings.  Granted, it’s Xerox, but still, it’s not common to see a stock double and still trade at less than 10 times earnings.  Looking through the rest of the list, there are a number of other semiconductor-related stocks (AMAT, STX, and QCOM), but another group that stands out is the homebuilders as DR Horton (DHI), PulteGroup (PHM), and Lennar (LEN) have all rallied more than 50% but still trade cheaper than the S&P 500.  Sign up for Bespoke’s “2020” special and get our upcoming Bespoke Report 2020 Market Outlook and Investor Toolkit. 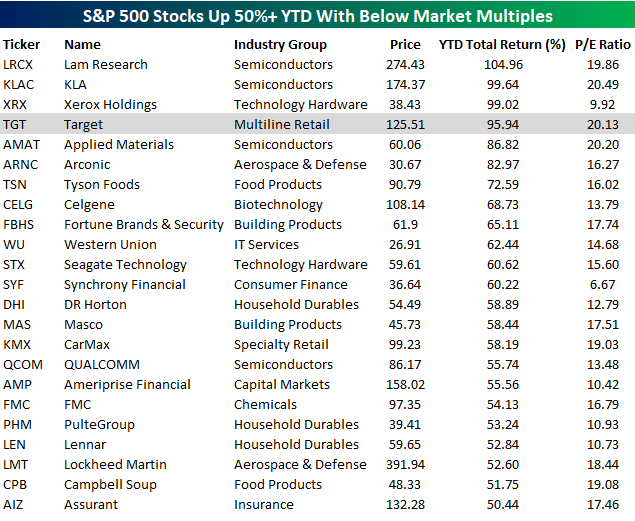