TAN Reacts to the IRA

Over the weekend, the Senate passed the Inflation Reduction Act after negotiations with Senator Manchin (D-WV) and Senator Sinema (D-AZ) concluded. The bill is nowhere near as wide-spanning, large, or impactful as the Biden administration had hoped for, but there are a few notable measures in the bill that will have significant impacts on certain parts of the economy. The name of the bill is also likely a misnomer, but the bill will reduce the deficit, establish a minimum tax rate for corporations, increase IRS funding (which should boost receivables), tax stock buybacks at 1%, incentivize electric vehicle and household appliance purchases through tax credits, encourage domestic investment in energy production, aim to reduce carbon emissions, and give the Medicare program the ability to negotiate drug prices in some situations.

As we noted in our Morning Lineup from last Friday, this is not a transformative piece of fiscal policy, as its size is less than 0.5% of GDP per annum. Although most companies will be unhappy with the buyback tax or the minimum corporate tax rate, the clean energy industry is celebrating the likely passage of this bill. As the odds of passage have become increasingly likely, the Invesco Solar ETF (TAN) has been moving higher alongside the broader market over the last few weeks. Notably, TAN has now broken its downtrend that had been in place since early 2021, depicted below, and has rallied more than 50% above its May low. Click here to learn more about Bespoke’s premium stock market research service. 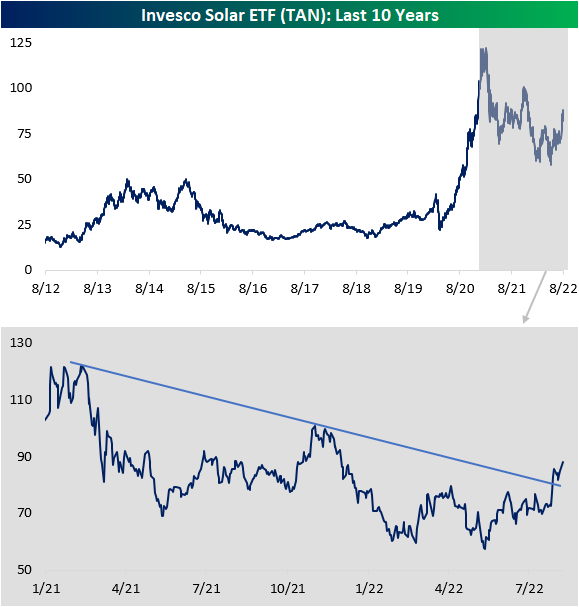 Below are the US-listed components of the TAN ETF. As you can see, most are in the overbought range, led by SunPower (SNWR) and Sunnova Energy (NOVA) while only two JinkoSolar Holdings (JKS) and Azure Power (AZRE). The reason these two stocks have underperformed likely stems from the fact that both are headquartered outside of the US while the bill favors domestic producers. Overall, the clean energy space is technically overbought, but TAN is still 27.7% off its early 2021 highs. If you are a client with access, you can view a custom portfolio of these stocks by clicking here. Click here to learn more about Bespoke’s premium stock market research service. 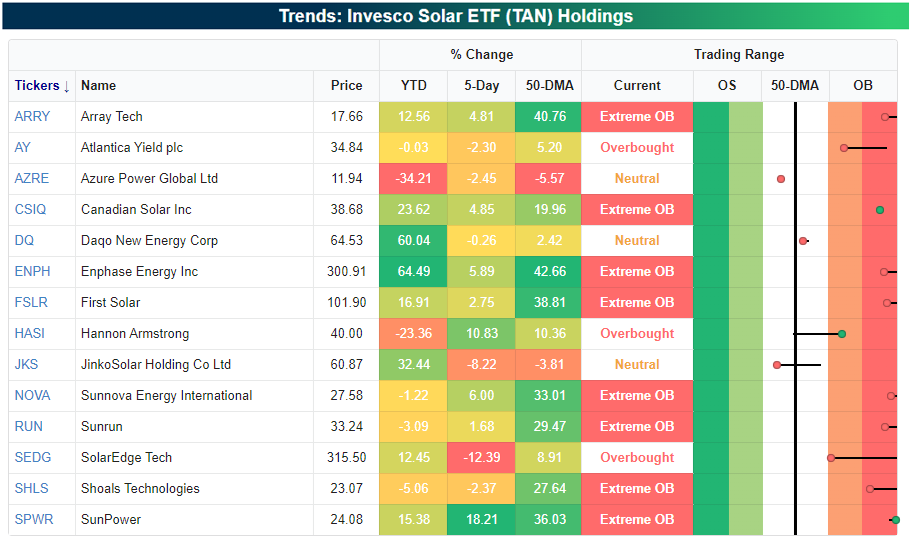