Crude oil is just about as popular or maybe even less popular than tobacco these days.  Sure, there was a brief spike in prices following the US drone strike on Iranian general Soleimani last Thursday night, but ever since then, crude oil has done nothing but trade lower.  Just the fact that crude only managed to rally 3% in the lead up to what many thought to be a full-blown war with Iran shows just how out of favor crude is.  This isn’t the first time crude hasn’t been able to hold onto gains either.  As noted earlier this week, besides the last week, there have been two other periods of heightened tensions between the US and Iran over the last year where one would have expected prices to rally, but instead they sold-off. 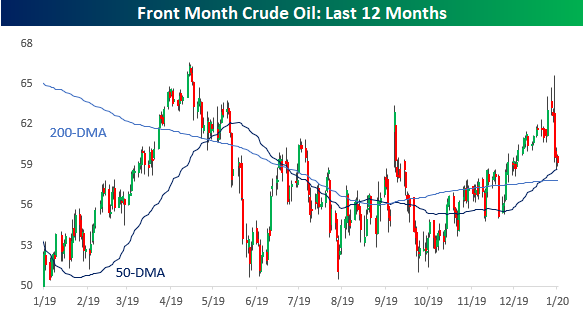 When a stock consistently opens at one price and then closes lower than it opened, it’s considered a negative as it signals that investors are selling into strength.  Applying that logic to crude oil confirms just how out of favor it has become.  This week alone, the daily closing price has been lower than its open on all five days.  The chart below shows daily streaks where crude oil closed below its opening price going back to the start of 2009. While the current five-day streak isn’t anything to write home about, we would note that even before this past week’s tensions in the Middle East, in late September/early October there was a streak of 13 trading days where the commodity closed lower than it opened, and that was the longest losing streak since at least the early 1980s! Before that, there was another streak of 7 trading days in July.  In other words, two of the five longest streaks since 2009 where crude oil closed below its open both occurred in the last six months.  Looking for more from Bespoke? Start a two-week free trial to Bespoke Premium and receive instant access to our best research today. 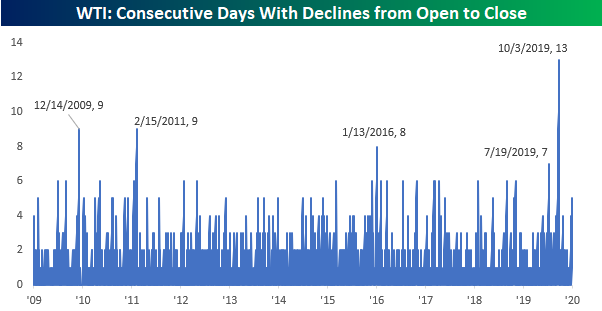