Swan Song Bodes Well for Intel (INTC) But for How Long?

After two years at the helm, news broke this morning that Bob Swan will be stepping down from his position of CEO of Intel (INTC).  He will be replaced by VMware (VMW) CEO Pat Gelsinger on February 15th. While INTC has been a significant underperformer over the past year—it is the only semiconductor stock in the S&P 500 that is lower than it was one year ago—the immediate response from the market to today’s news has been overwhelmingly positive.  As of this writing, the stock is up 8.55% which would be its best day since March of last year around the time of the bear market lows. 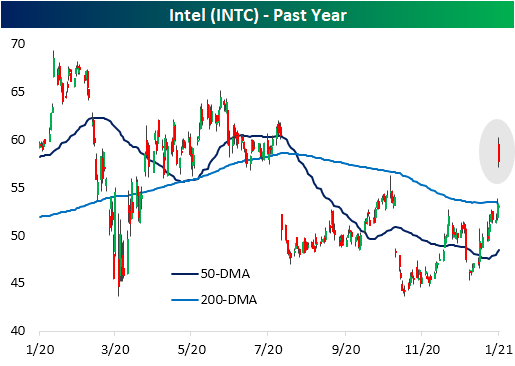 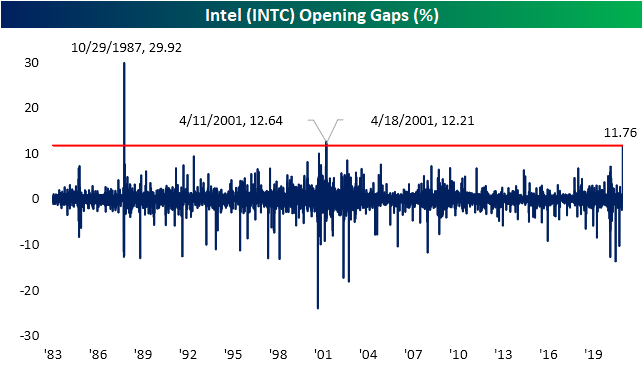 Today’s gap up on the news of a CEO change was also even larger than any move on earnings of the past nearly two decades.  As shown in the snapshot from our Earnings Explorer below, the best gap up on earnings news that INTC has experienced since late 2001 was a 7.27% gap following the Q1 results of 2008.

As previously mentioned, there is not much historical precedent for INTC from gaps up as large as today, but of the past four times that INTC gapped up at least 10%, performance in the weeks and months after have generally been pretty negative. The next week has usually seen some further moves higher with the only decline being the second gap up over 10% in April 2001.  As for returns throughout the next year, the stock has consistently declined. Like what you see? Click here for a trial to any of Bespoke’s premium membership options.