Housing market data is the main focus in today’s macroeconomic slate, and although Housing Starts and Building Permits both came in below estimates, weekly mortgage applications from the Mortgage Bankers Association (MBA) were much stronger.  MBA’s seasonally adjusted purchase index rose another 3.46% week over week. That marked the ninth consecutive sequential increase (the longest such streak on record) and the highest level for the index of the post housing crisis period.  In fact, this morning’s reading was the highest since the first week of 2009.

That is a massive rebound after purchase apps had fallen to their lowest levels since early October of 2015 back on April 10th.  In the ten weeks since that low, purchases have rise 76.62%.  As shown in the second chart below, that is the largest 10-week increase since the early days of the index: March of 1991. 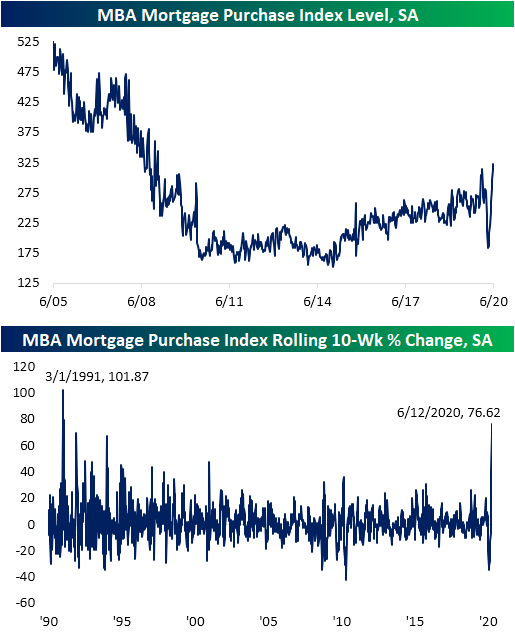 As for what has driven that surge in purchase applications, interest rates have played a major role.  Although they are off the lows after rising a few basis points over the past few days, last Thursday the national average for a 30 year fixed rate mortgage fell to 3.38% which was the lowest level since October 3rd of 2016. 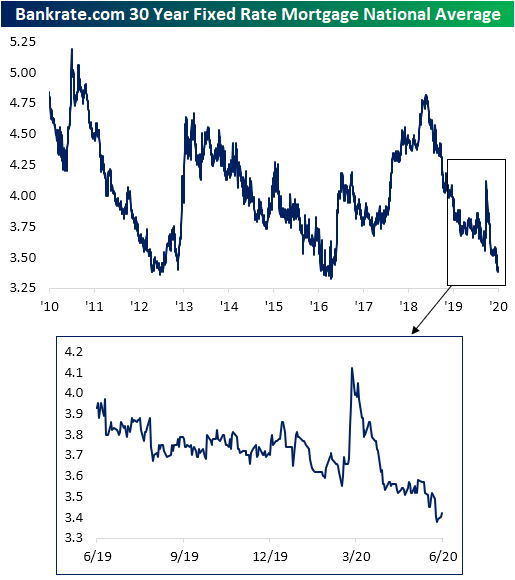 Low mortgage rates have also led to strong levels of refinancing applications.  Earlier this year refinances spiked to their highest level since 2009.  In the wake of that March peak, refinance application strength subsided a bit, but has remained at very strong levels.  This week’s 10% WoW increase marked the first back to back weeks with higher refinance applications since the last week of February and the first week of March.  That also comes after seven consecutive weeks of declines from mid-April through the end of May. Even though refinances are nearly 65% off that early March peak, they remain at some of the highest levels since 2013. 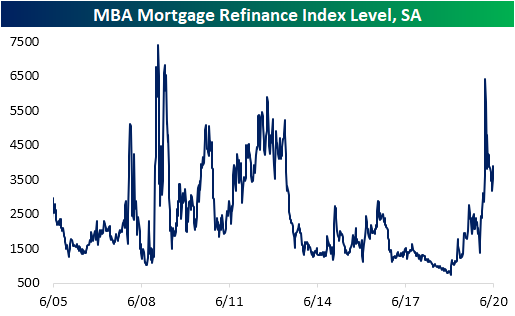 In addition to low rates, due to the COVID-19 shutdowns occurring during what is a seasonally strong time of year, seasonal catch up is also providing a boost this year.  As shown below, the past few weeks have seen some of the strongest readings for the specific week of the year of the past decade.  That comes shortly after shutdowns resulted in the weakest readings of the past decade for the weeks around March and early April.  Additionally, purchases have continued to rise despite the annual peak typically having already occurred by this point in the year.  In the past decade, the annual peak for purchases is usually put in place by mid-April or mid-May. The only year with an annual peak later than that was 2015 on account of a change in mortgage disclosure rules leading to a one time surge in purchase applications. While 2020 is far from over, the continued strong readings are sure to make a later seasonal peak than normal. 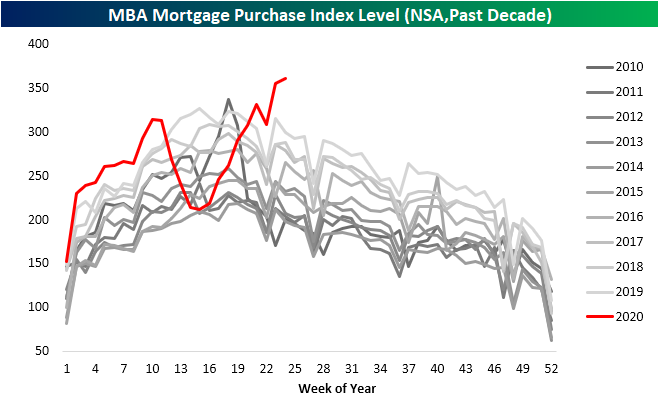 Despite the recent strength, the damage from weakness earlier in the year still hasn’ been undone. Looking at the YTD sum of purchase applications through the current week of the year (24th week) applications are down roughly 2% in 2020 vs 2019.  Given that the US is in the midst of a global pandemic, however, it could be a whole lot worse. Click here to view Bespoke’s premium membership options for our best research available. 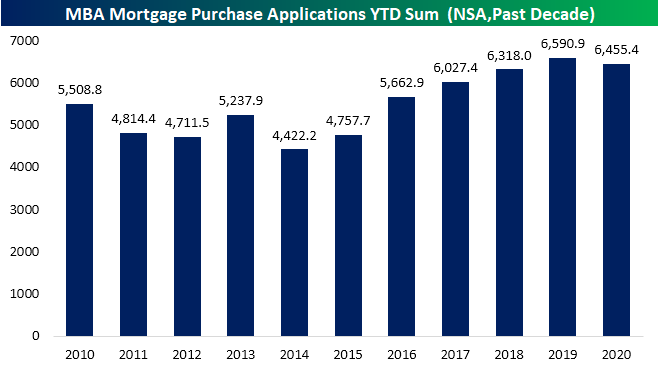