This year’s Super Bowl will be a first for many different reasons.  It will be the first-ever game played in the home stadium of one of the teams playing.  It will be the first-ever game with a 43-year-old starting QB.  The age difference between the starting QBs will be the widest ever (18+ years). The game will not be played to a full stadium (attendance capped at 25K).  We could go on.  Another interesting aspect of this year’s game is that it will break the tie between the AFC and NFC for the number of championships won (27).  The last time the two conferences had an equal number of Super Bowl titles was back in 1990 after Super Bowl XXIV when each conference had 12.  The New York Giants broke that tie in 1991 when Scott Norwood went ‘wide ride’ to give the NFC its 7th straight and 13th total Super Bowl victory.  From there, the NFC continued its domination of the AFC (and the Bills) winning the next six championship games, including three against the Bills. 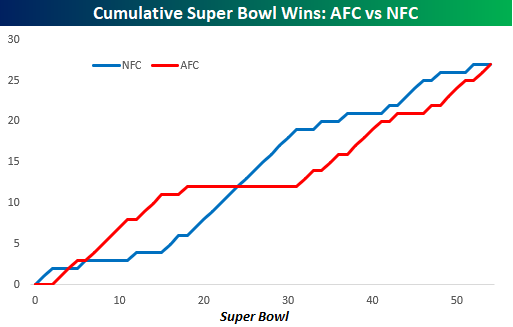 We’ve all heard of the Super Bowl market indicator which says that a win for the NFC bodes well for the equity market while an AFC victory is a bearish signal.  For years, there actually was a wide gap in performance for the market following wins by either conference in the past, but in recent years the disparity has narrowed.  In the 27 years where the AFC has won the Super Bowl, the S&P 500 averaged a rest of year gain of 6.9% with positive returns 70% of the time.  When the NFC wins, though, the S&P 500’s average rest of year performance has been a gain of 10.5% with positive returns more than 77% of the time.

For the NFC, Tampa Bay’s one and only appearance in the Super Bowl was in 2003 (XXXVII).  They won that game, and the S&P 500’s rest of the year gain was over 29%.  Additionally, while they’re on a new team now, in the three Patriots victories where Tom Brady and Rob Gronkowski were both on the team, the S&P 500 was higher for the remainder of the year all three times for an average gain of 12.7%. Go Bucs! Click here to view Bespoke’s premium membership options for our best research available. 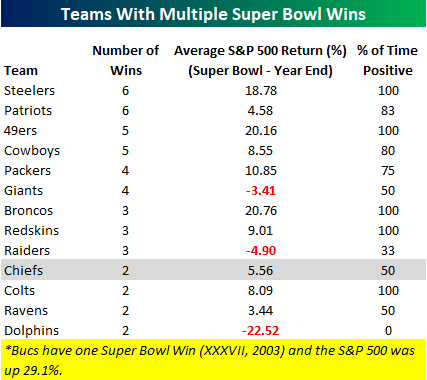