Americans across the country are gearing up for Super Bowl LVI this Sunday. The Rams are currently a four-point favorite, and the Bengals could struggle to contain the league’s best defensive line. Both teams come into this game with their respective offenses on fire, and the last few weeks of the playoffs have resulted in nail-biting finishes.

One outlandish market theory suggests that when the NFC wins the Super Bowl the market will perform better than average. Conversely, when the AFC wins, the market underperforms. Although there is no basis of truth to justify these claims, the conclusion has historically been accurate. As you can see from the table below, the S&P 500 averages a gain of 10.3% from the Super Bowl through year-end when the NFC takes home the Lombardi trophy. On the other hand, when the AFC wins the Super Bowl, the S&P 500 averages a gain of 6.2%, which is 4.1 percentage points lower. The positivity rates have slightly favored an NFC victory as well (78.6% vs 70.4%).

Given that the one Super Bowl the Rams won was in 2000, you would think that the last thing a bull would want to see on Sunday is a win by Matt Stafford and crew.  On the other hand, in the two prior Super Bowls that the Bengals played in and lost, the S&P 500 was up over 20% for the remainder of the year both times, so it’s a bit of a push.  Within the Bespoke crew, the Bengals are a near but not unanimous pick,  Who has heads on the coin toss? Like these charts?  See more stock market research from Bespoke by starting a two-week trial to Bespoke Premium today. 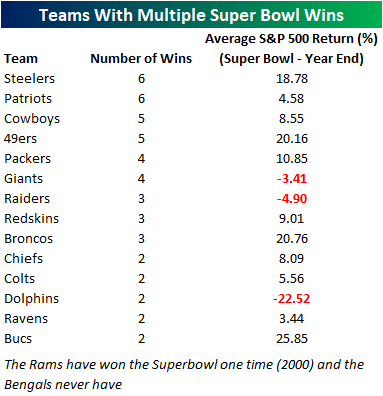