Earlier this week, we took a look at the decline in airline passenger traffic in recent weeks and noted that while some of the declines may be related to the Delta-variant, seasonality was likely a decent contributor to the slowdown.  With summer winding down and schools getting back into session, vacation season is winding down and diminishing the need for air travel. At the same time, business travel remains depressed and therefore isn’t there to pick up the slack.

It’s only one data point, but along these lines, we were surprised to see that subway ridership in New York City has seen little in the way of a negative impact on ridership in recent weeks. On a good day, the last place most people want to be is on the subway, and if you’re worried about catching COVID, it’s one of the first places you would avoid.  The chart below shows weekly turnstile traffic on NYC subways going back to 2015 with red dots marking comparable weeks to the most recent data.

The first thing that stands out on this chart is that subway traffic still has a long way to go before getting back anywhere close to normal levels.  From 2015 through 2019, subway traffic was gently drifting lower but was still pretty consistently above 30 million riders per week.  At the depths of the shutdowns, ridership plummeted down to 2.6 million riders and has slowly climbed higher ever since.  In the week ending 8/14, ridership totaled just under 12 million riders.  While that is up over 50% from the same week last year, it is still well below the average of 30 million for the same week of the year from 2015 through 2019. At this point, ridership would have to increase by 150% just to get back to pre-pandemic levels.

Looking a little closer at the ridership numbers, we found it interesting to see that while ridership usually declines in August (look at the line before the red dots in each of the years before 2020), this year we haven’t seen nearly as large of a drop. To put it in percentage terms, from 2015 through 2019, weekly ridership in the current week of the year dropped an average of 5.6% relative to its level from four weeks earlier.  This year, though, the decline has been close to half that at 3.3%.  In the grand scheme of things, this isn’t an enormous difference, but if the surge in COVID cases was causing more cautious behavior, we would have expected to see an even larger decline.  An alternative explanation for a smaller than normal decline in ridership levels could be due to the fact that many of the people riding the subway now have little in the way of alternative options for commuting and are in fields where summer vacations aren’t as typical as those in other occupations.  Ultimately, it’s probably a little of both, but seeing subway ridership levels hold up even as COVID cases surge is a trend we didn’t expect to see.  Click here to start a Bespoke Premium trial and receive access to all of our market analysis and commentary. 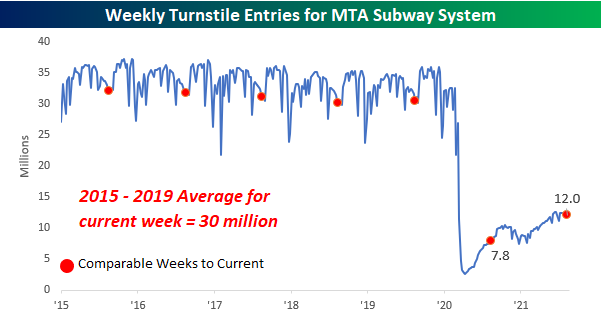