In terms of single versus multi-family units, Housing Starts saw a uniform increase rising just over 6%, but on a regional basis, strength was seen in the West and South, while both the Northeast and Midwest experienced high single-digit declines.  Building Permits were weaker at the single-family level than the multi-family level, which could be a result of higher input costs.  On a regional basis, though, Permits were down all over the country with the South seeing the most modest declines.

One note regarding the miss in Permits – although they were lower than Starts in June, they were higher than Starts in each of the past 15 months, so they have been running at a stronger pace than Starts for quite some time.  Click here to view Bespoke’s premium membership options and receive a more detailed analysis of economic data.

As far as overall trends in Housing Starts and Permits are concerned, the longer-term trend remains positive.  Housing Starts are a great leading indicator of the business cycle, and the 12-month average continued to surge to new multi-year highs in June reaching the highest level since June 2007.

Zooming in on just the last ten or so years, both Housing Starts and Building Permits experienced a brief dip in the aftermath of the COVID outbreak but quickly resumed their upward trend and have been accelerating to the upside.  Also, barring a complete cratering of the monthly numbers, these 12-month averages should continue to rise in the months ahead. 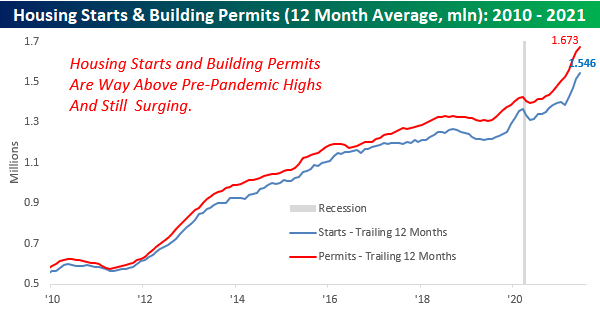 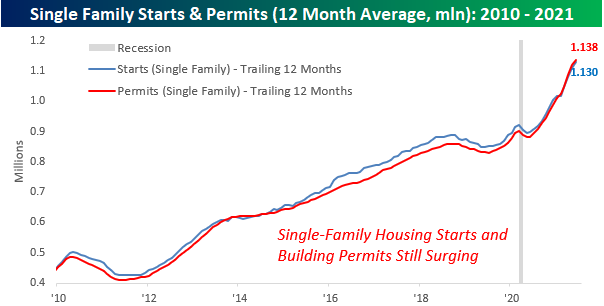 The fundamental backdrop for Housing Starts and Building Permits may still look positive, but homebuilder stocks have been under pressure lately after an insanely strong rally earlier in the year.  Since its peak in early May, the iShares Home Construction ETF (ITB) has dropped 15% in a series of lower highs and lower lows. 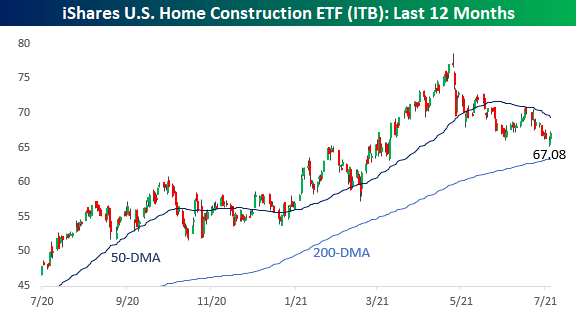 Higher labor and input costs have weighed on sentiment for the sector, but some of the input costs have reversed and lower interest rates should also act as a tailwind.  Looking at a longer-term chart, there has been a positive correlation between Housing Starts relative to the performance of ITB, and as these charts illustrate, while the short-term picture for ITB (above) looks somewhat ominous, the longer-term picture looks much more benign.  As shown below, the recent pullback in ITB looks more like a reversion to the mean as they got a bit ahead of themselves earlier this year.  One trend to keep in mind going forward for the homebuilders is that if the recent price declines for housing inputs remain in place, they have the potential to see some significant improvements to margins if they can continue to command higher prices. 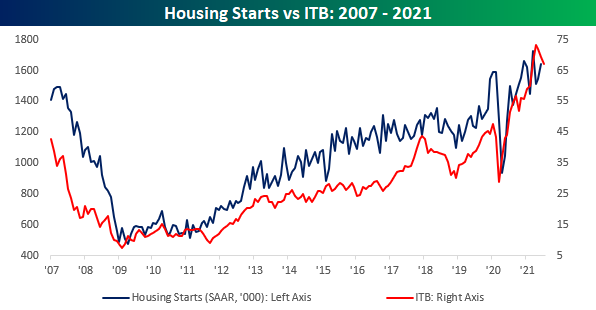