Strong Performance at the Tail Ends of Breadth

While the index turned lower today on weaker breadth, the recent rally for the S&P 500 has come on strong breadth resulting in the 10-day advance/decline line to surge to some of the highest readings on record.  Monday and Tuesday saw 99th percentile readings in the 10-day A/D line and even after the decline today, the current reading remains in the 96th percentile.  At Monday’s high, the 10-day AD line reached the most elevated level since October 2020. On a sector level, in the past week Financials, Health Care, Materials, Real Estate, and Tech also all saw 99th percentile readings in their own 10-day advance-decline lines. 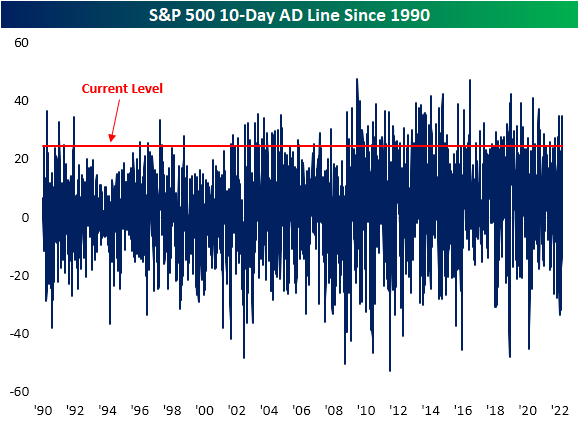 In the matrix below, we show the average forward performance of the S&P 500 broken down by the percentile range that the index’s 10-day AD line is in.  Generally, lower readings in the 10-day AD line have been followed by stronger returns whereas higher readings have been followed by weaker returns. That is, except for the most elevated readings.  Readings in the upper decile have actually been followed by more consistently positive and stronger than normal average returns for the S&P 500. In other words, strong breadth is typically a more negative signal for the S&P 500 going forward, but an extremely strong breadth reading has actually been positive. 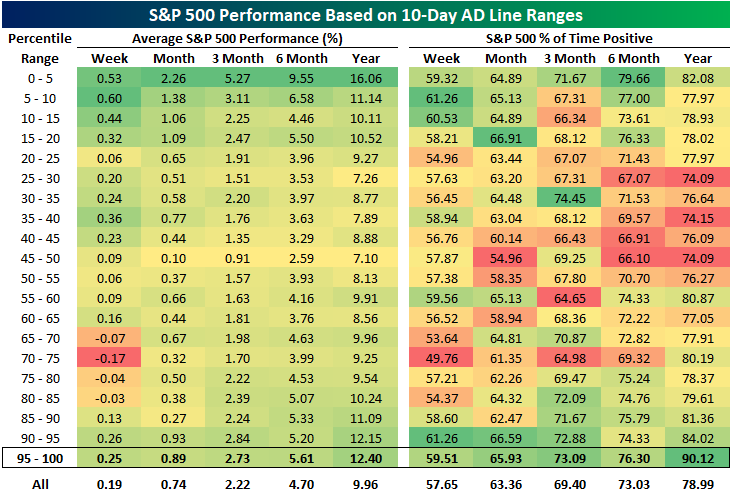