Technology (XLK), Energy (XLE), and Consumer Staples (XLP) tend to trade quite differently from each other for a variety of reasons. The Consumer Staples sector tends to be more defensive in nature as spending on the ‘essentials’ tends to hold up better in times of uncertainty than spending on more cyclical goods.  XLE is largely levered to the price of energy commodities but also acts as an inflation hedge.  Technology, meanwhile, tends to do best in a bullish tape as investors gravitate towards sectors with the brightest growth prospects.  Because these sectors have different exposures, it is uncommon to see weeks like last week where these three sectors top the leaderboard for a given week. In fact, this has only occurred 9 times since the start of 2000, and two of those occurrences were in back-to-back weeks at the end of 2007.

In the table below, we show each of the prior weeks that Technology (XLK), Energy (XLE), and Consumer Staples (XLP) were the three top-performing sectors (without a prior occurrence in the last three months) along with the S&P 500’s performance over the last following week, month, three months, six months, and one year.  In more than half of the prior eight occurrences, the equity market was lower during weeks when this occurred, and in the two prior weeks where the S&P 500 was higher, it was up less than 1%.  In other words, there has never been a week like the last one where the S&P 500 was up close to 3% and these three sectors topped the leaderboard.  After the eight prior occurrences, the S&P 500 was consistently higher one week and one month later with positive returns six out of seven times.  Moving further out, though, the consistency of positive returns was less.  In fact, three months later, the S&P 500 was only higher four out of seven times, while six and twelve months later it was higher five out of seven times.

Somewhat ominously, the worst forward returns came after the occurrence almost exactly fourteen years ago in December 2007 when the S&P 500 went on to decline 40% in the following year.  One difference between that period and last week, though, was that instead of those three sectors leading the market in a week where the S&P 500 was up over 2%, in that week the S&P 500 was down over 2%. Click here to view Bespoke’s premium membership options. 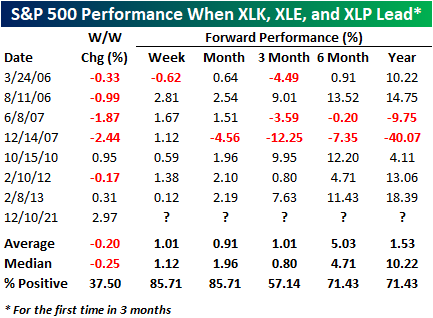