Stocks To Be The Most Thankful For 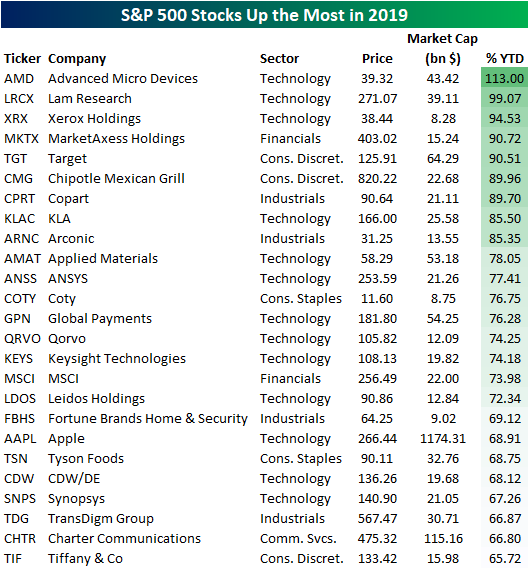 Apple (AAPL) is the 19th best performing stock in the list above.  But because of its trillion+ dollar market cap, Apple’s (AAPL) 69% gain has a much bigger impact on the overall stock market than all of the other stocks that have seen a bigger price move this year.  In fact, of the S&P 500’s 25% price gain this year, Apple has accounted for 2.24 of those percentage points (or roughly 9%).

Instead of looking at simple year-to-date price change, below is a list of the stocks that investors should be most thankful for this year because of their contribution to the S&P’s gains.  Right behind Apple (AAPL) in first is the other trillion+ dollar company — Microsoft (MSFT) — which has accounted for 1.7 percentage points of the S&P’s 25% gain.  After AAPL and MSFT are Facebook (FB), Alphabet (GOOGL), and Amazon (AMZN).  Together these five mega-caps account for 25% of the S&P’s move higher this year.  While this group of companies has been vilified in 2019 for a number of things, they’re certainly still delivering for the stock market in a big way.  See Bespoke’s most actionable investment ideas with a two-week free trial to Bespoke Premium. 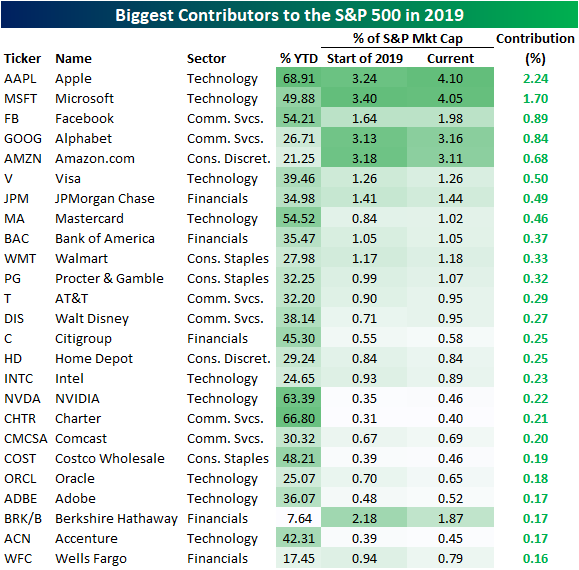