Stocks In The Year Ahead of Elections

Can you believe we still have another year to go before the next election?  Even though the Iowa caucuses are still more than two months away, it seems like it has been campaign season forever now.   With today being Election Day 2019, though, we wanted to take a quick look at market performance in the year leading up to Presidential elections.  Since the 1930s, the 365 days ahead of elections have tended to see stocks rise, with only 1932, 1940, 1960, and 2008 seeing stocks drop as candidates contested the White House. The average return around 6.7% isn’t amazing but isn’t too bad either. Median returns of 7.9% are stronger. 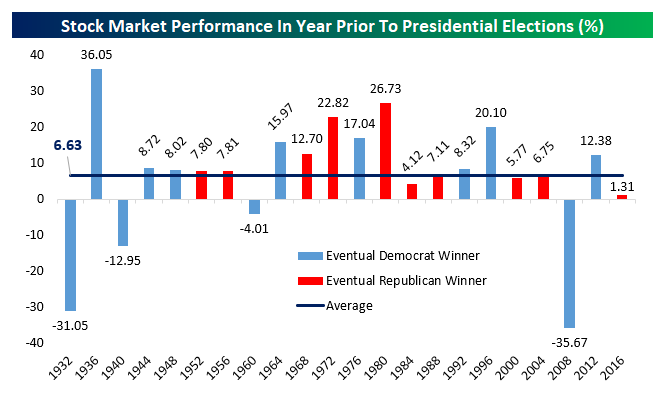 Where things get interesting is the split between parties. At a surface level analysis, the average return for years ahead of Democrats winning the White House has been +3.6%, much weaker than the +10.3% for years ahead of Republicans’ retaking the White House.  This would suggest that markets rally more in anticipation of a Republican victory.  Taking a closer look, though, median returns are modestly stronger for Democrats in the year leading up to Presidential elections.  The reason for the big difference in the average and median is that 1932 and 2008 both saw huge declines in the year leading up to a Democratic victory.  The median return isn’t weighted as much towards those two massive declines.

In our view, these numbers suggest little in the way of a difference between market performance leading up to Presidential elections where Republicans or Democrats are victorious.   Every election is different.  Some are closer than others.  In some cases, it is well known which party will win, while in others it is even more ‘well known’ and the other party wins!  Besides that, there is also usually a big difference between what a candidate says they will do and what they are actually able to accomplish as President.  Presidents Obama and Trump were both elected along with full control of Congress and even they had trouble getting through all of what they campaigned on.  In many cases, not even the market knows which party will win, but even more importantly, how their terms in office will unfold.  Sign up for Bespoke’s “2020” special and get our upcoming Bespoke Report 2020 Market Outlook and Investor Toolkit.