“You pay a very high price for a cheery consensus. It won’t be the economy that will do in investors; it will be the investors themselves. Uncertainty is actually the friend of the buyer of long-term values.” Warren Buffett

You don’t need us to tell you that 2022 has been a volatile year for the stock market, but in one way it has been even more volatile than you think.  Nowhere in the equity market has the uncertainty and day-to-day moves been higher than in the Nasdaq.  Over the last 50 trading days, the Nasdaq’s average daily move has been a gain or loss of 1.76%, and on a YTD basis, the average remains at a still unsettling level of 1.66%.  To put this in perspective, in all of 2021, there were only 37 days that even experienced a gain or loss of 1.66% or more.  While volatility has spiked this year, relative to other periods in the last thirty years or so, there have been plenty of other stretches when the average daily move spiked even more.  Back in early 2020, the Nasdaq’s average daily move over the prior 50 trading days spiked to more than 3%, and in October 2011, the average daily move spiked to just over 2%.  Those two periods, however, pale in comparison to the Financial Crisis when the average daily move approached 4% per day! That was even greater than the highs from the bursting of the dot-com bubble when 3% daily moves for the Nasdaq were routine. 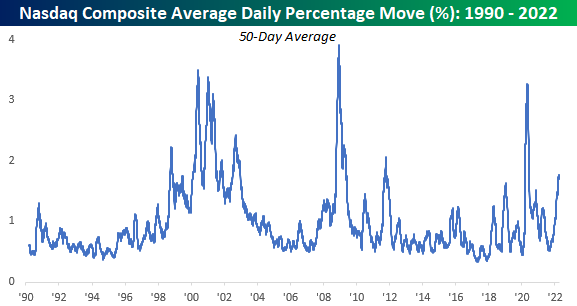 Although the Nasdaq’s average daily move is nowhere near its highest levels of the last twenty years, volatility has still been extremely high.  While this week is only three trading days old, we’ve already had three days where the Nasdaq had a daily move of at least 1%, and as a result, we have now had a total of 12 straight weeks where the Nasdaq experienced at least three 1% daily moves (even including holiday-shortened weeks).  In the chart below, we show weekly streaks where the Nasdaq experienced at least three trading days of 1% moves.  The current streak isn’t over, but it has already eclipsed any streaks seen during the COVID crash or the Financial Crisis. In fact, to find a longer streak you have to go all the way back to September 2002 in the waning days of the dot-com crash.

As noted above, Warren Buffett once said that uncertainty is the friend of the buyer of long-term values, but volatility can be unsettling for individual investors, and as Peter Lynch once said, “Not everyone has the stomach. If you are susceptible to selling everything in a panic, you ought to avoid stocks and mutual funds altogether.” Click here to view Bespoke’s premium membership options. 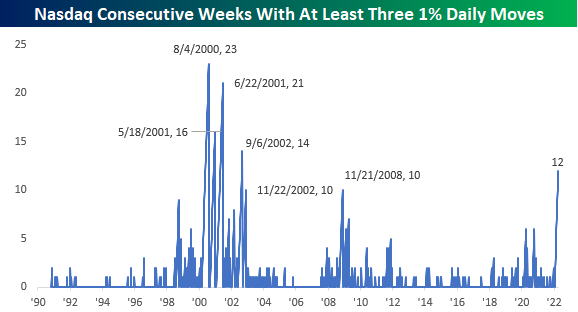