Still No Love for Strong Earnings

For a few quarters now we have seen extremely strong earnings reports relative to expectations.  Over the long-term going back to the early 2000s, roughly 60% of stocks have topped quarterly earnings estimates.  Over the last year, the beat rate has jumped up to 76%, and this earnings season we’ve seen an 81% beat rate.  Prior to the current bull market that began in March 2020, an earnings beat resulted in a one-day share price gain of 1.78% on average, but so far in 2021, stocks that have beaten earnings estimates have actually averaged a one-day decline of 0.01%.  This essentially means that an earnings beat is now viewed as par for the course; something that is a given.  This is likely something we’ll continue to see until earnings beat rates drop back down to more normal levels.

An earnings triple play is a term we coined back in the mid-2000s for a company that not only beats earnings estimates but also tops sales estimates and raises forward guidance.  Triple plays (beat EPS, beat sales, raise guidance) are the “cream of the crop” of earnings season, and stocks that report triple plays have historically reacted very positively to the news. 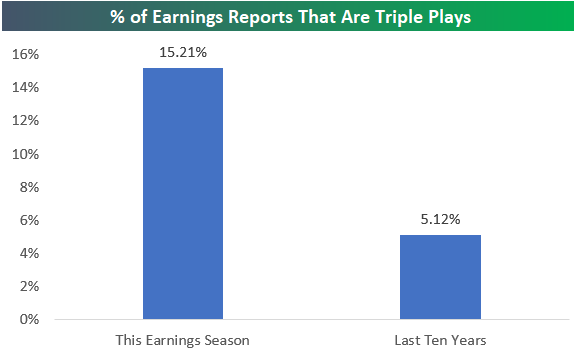 Given the sharp rise in the number of triple plays this earnings season, the normal share-price jump that usually accompanies the report has just not materialized.  Below is a snapshot we took using our Earnings Explorer that provides a summary of all earnings triple plays seen over the last ten years.  During this span, we’ve seen 5,159 earnings triple plays since May 2011, and these triple plays have averaged a one-day gain of 5.25% in reaction to the news.  A one-day gain of 5.25% is nothing to sneeze at, but it’s to be expected (normally) when a company reports a strong quarter and raises forward guidance.

If we only look at earnings triple plays so far this earnings season, however, we see that they’re hardly gaining at all in reaction to the strong report.  The 148 triple plays seen so far this season since April 12th have averaged a one-day gain of just 1.61%.  That’s less than a third of the usual gain seen for triple plays.  Similar to the commentary above around earnings beats, until we see the number of triple plays drop back down to more normal levels, investors will likely continue to shrug at them.  Our Earnings Explorer is an excellent resource that’s available with a Bespoke Institutional membership.  You can start using it today with a two-week trial. 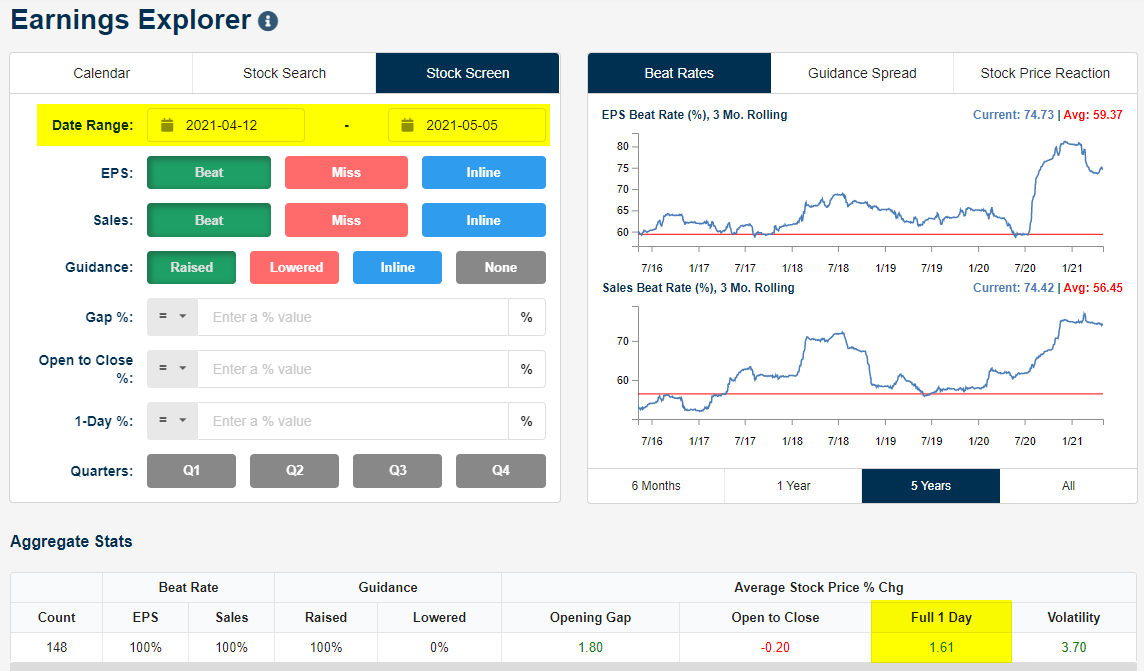