Still A Lot of Triple Plays

Although there are still a decent number of reports scheduled to come out over the next few weeks especially from major retailers, the pace of earnings slows significantly as Walmart’s (WMT) results out this morning marked the unofficial end of earnings season.  With earnings season now more or less in the rearview, taking a look back at this past season, triple plays continued to come in at historically strong levels.  A triple play is when a company reports EPS and sales above analyst forecasts while also raising guidance, which indicates a strong fundamental background for a company.  In the chart below, we show the 3-month rolling percentage of stocks that are reporting triple plays.  The past year has seen this reading skyrocket whether it be on account of dour forecasts and/or business quickly bouncing back from the pandemic.  Even though the rate of triple plays did peak earlier in the year, currently, it sits around 14% which is still well above any reading prior to the past year. 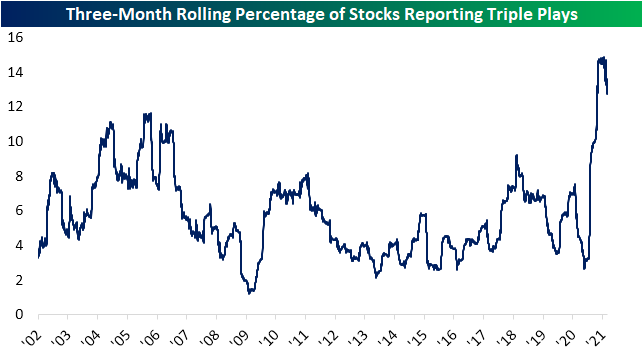 In aggregate, elevated beat rates this earnings season have been met with a yawn in terms of stock price reactions, and that has especially been true of the gold standard of beats: triple plays.  As shown below, the average full-day performance on the earnings reaction day of those stocks that reported triple plays this season was only a 1.97% gain.  While positive and much better than the 48 bps average decline for all stocks reporting this season, it does set a record for the worst collective reaction to triple plays of any earnings season going back to 2001 when our Earnings Explorer data begins. The past two quarters have similarly been met with historically weak reactions, but this past quarter has blown those out of the water. On the bright side, the percentage of triple plays that rose on their earnings reaction day did rise to 62.94% from 61.25%.  That is the highest reading of the past few quarters, but again, is a historically muted reaction. 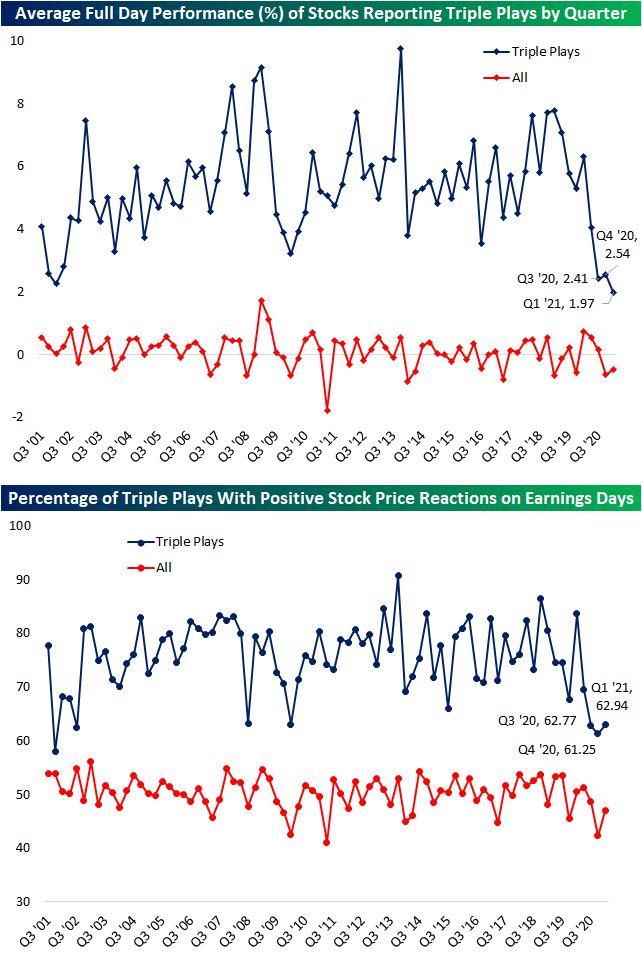 In the earlier days of this past earnings season, we had highlighted one other interesting trend regarding recent triple plays: it hasn’t been just one sector or group with strong beat rates, rather a high percentage of stocks are reporting triple plays regardless of their sector.  Even with the aggregate percentage of stocks reporting a triple play having peaked, that strong breadth was still evident through the end of the current earnings season. The percentage of stocks reporting triple plays within the Communication Services, Consumer Discretionary, Consumer Staples, Industrials, Materials, and Tech sectors were all at a record high or had pulled back but were still above any reading prior to the past year.  Some of the more remarkable readings came from Consumer Discretionary, Industrials, and Materials which have been well above any historical precedent. Even for sectors that did not necessarily see a large share of their stocks report triple plays compared to times in the past, like Energy or Financials, this quarter’s readings were still some of the strongest of the past several years. Click here to view Bespoke’s premium membership options for our best research available.