The January report on Housing Starts and Building Permits was mixed relative to expectations, but the overall backdrop remains very strong.  Starting with Housing Starts, they posted a decline of 6.0% m/m falling to 1.58 mln versus expectations for a much smaller decline, but keep in mind that it comes after a 10+ year high in December. 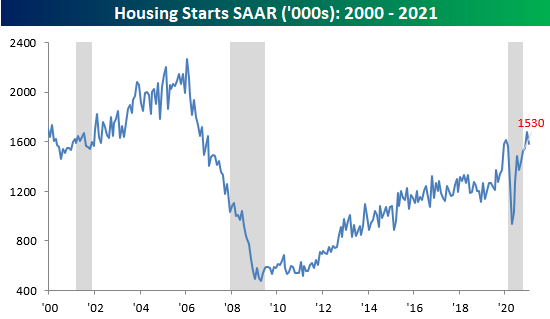 Building Permits, which are less impacted by the weather, were much stronger in January.  They surged to 1.881 million versus 1.704 mln in December and expectations for a much more modest level of 1.694 mln.  Following January’s increase, Permits are now less than 17% from their bubble high in 2005. 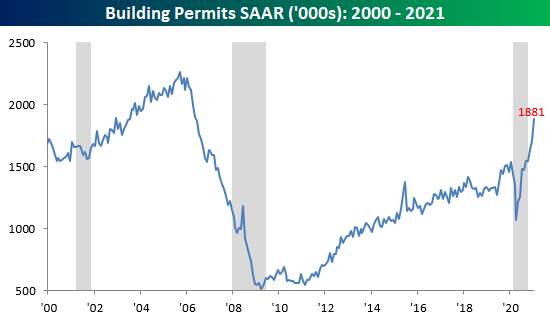 Looking at the chart above, Permits have practically turned parabolic in the last few months.  While it’s somewhat arbitrary to look at a nine-month rate of change, the fact that Permits have just experienced their second-largest increase in that span is worth highlighting. What’s also worth pointing out, too, is that while Permits are rebounding from a nine-month decline of just over 20%, the two prior spikes highlighted in the chart came following much larger declines. 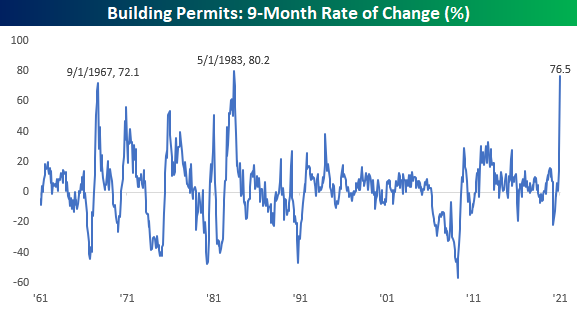 In terms of the breakdown of this month’s report, the fact that multi-family starts and permits were key drivers of strength is a bit of a drawback.  Single family-starts actually dropped more than 12% m/m while permits were up less than 4%.  Multi-family units, meanwhile, were up over 15% for both starts and permits.  On a regional basis, every region of the country saw declines in starts relative to December, while the Northeast was just barely higher.  Start a two-week free trial to Bespoke Institutional to access our interactive economic indicators monitor and much more. 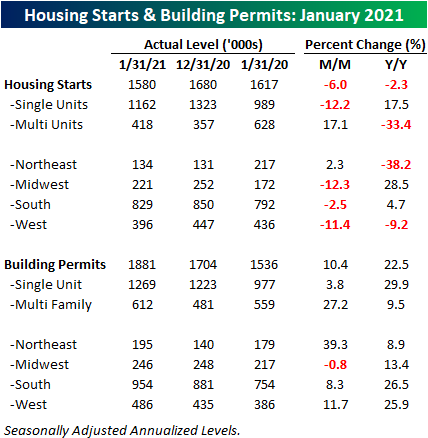