As of this writing, the S&P 500 (SPY) is currently up 0.24% today and is looking to snap a five-day losing streak. While the move has its own degree of excitement, overall the S&P 500 has been on a pretty boring stretch of late.  August 18th was the last time that the S&P 500 rose or fell more than 1% in a single session. Not only does that make the current streak including today 17 trading days long, but that move on August 18th had also brought to an end another 17-day long streak without a move of at least 1%. With only a single day between the past two 17-day long streaks, there was also another streak identical in length ending in June.  These three stretches tie for the longest run without a 1% move of the post-pandemic period with the prior streak ending in late January 2020.  As shown below, going through the history of SPY this year’s non-volatile stretches stand out but are far from the longest streaks on record.  For example, the second half of 2016 through 2018 saw multiple streaks without a 1% move that were between 43 and 74 trading days. To find the longest stretch without a 1% one-day move, you have to go back to 1995 when SPY went 83 trading days without a daily move of 1%. 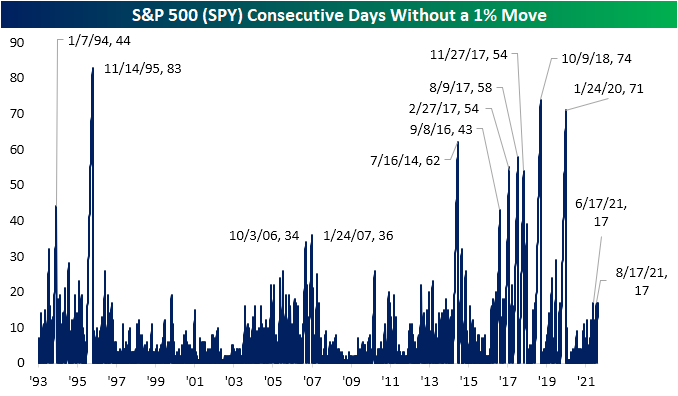 Given there has only been a single day in the last 35 in which the S&P 500 (SPY) has gained or lost more than 1%, taking a look at the 3 month rolling average for the daily move in SPY shows daily volatility has certainly been at the low end of the historical range.  Historically, SPY has averaged an absolute daily change of 78 bps.  Over the past 90 days, though, SPY’s average daily move has been just 47 bps, ranking in the bottom quintile of readings. Investors expect ‘dull’ trading during the summer months, but now that the calendar says September, a lack of volatility would be out of the norm.  Click here to view Bespoke’s premium membership options. 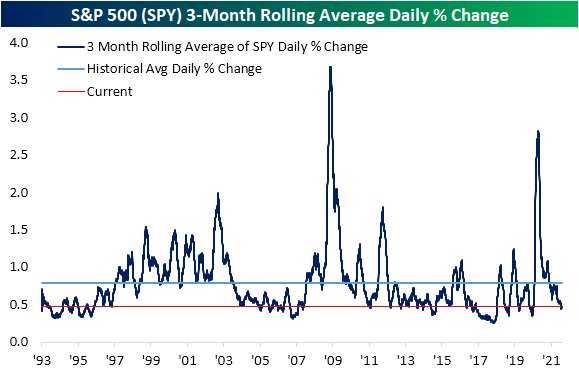