After a gap down Friday in the wake of the much stronger than expected July Employment report, equities rallied throughout the trading session and finished near the highs of the day.  Friday’s bounce sets the stage for a critical week where the S&P 500 has its eyes set on breaking above resistance just below $420.  Beginning in early March, that level acted as support multiple times and eventually set the stage for a strong rally to close out the quarter.  Then, once that rally ran out of gas, $420 was only able to provide brief support in the next leg lower.

In mid-May, when US stocks were back at new lows for the year, bulls were able to scrounge together enough energy to get off the couch and rally again, but it was short-lived as $420 loomed above and the buzz-kill of much stronger than expected inflation and hawkish FOMC commentary focused on the concerning increase in gas prices quickly took stocks back to new lows again.  By the time July 4th came around, though, bulls must have been feeling patriotic again.  That, or the fact that gas prices and other commodities were showing meaningful signs of decline, set the stage for another rally right to where the market finds itself now.

Stocks are higher to start the week with the S&P 500 up almost 1% in early trading, which is impressive given the earnings warning from NVIDIA (NVDA) just before the open.  The S&P 500 was able to break its downtrend from the March high a couple of weeks ago, but if it can manage to make a higher high and clear $420, the charts will start looking a lot more kind. Click here to learn more about Bespoke’s premium stock market research service. 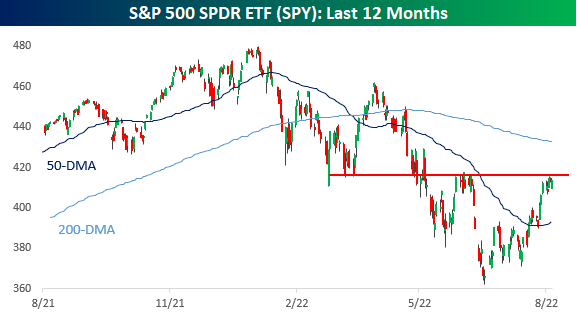