Sport Stocks Still In A Slump

The outbreak of COVID-19 has put a wide array of sports on hold from the NHL, NBA, and MLB in the US to the Olympics on the global stage. With the operations of these businesses basically shut down for the foreseeable future, it makes sense that they underperformed the S&P 500 during the worst of the sell off.  Whereas the S&P 500 fell 33.92% from 2/19 through 3/23, the average ‘sport stock’ was down 42.35%. The worst decliner of these was Churchill Downs (CHDN) which fell 55.34%. CHDN is the owner of several racetracks and casinos around the US including the track from which it derives its name, Churchill Downs in Kentucky where the Kentucky Derby takes place. On the bright side, CHDN has far outshined its peers since the market’s bottom on 3/23 rising 41.59%. Meanwhile, Liberty Media – Liberty Braves (BATRA), owner of the MLB’s Atlanta Braves and the Premier League soccer team Manchester United (MANU) have only risen 16.61% and 11.94%, respectively since the 3/23 low. Even after those rallies more recently, these stocks are still down 29.28% on average from their levels on 2/19 compared to the S&P 500 which has outperformed by more than 10 percentage points.  As for YTD performance, ‘sport stocks’ are also underperforming the S&P 500 by over 13 percentage points.

We created a custom portfolio of these stocks, and below we show the charts of these stocks from our Chart Scanner. As shown, this group experienced just as sharp of a drop as many other stocks but have been grinding higher more recently.  Every stock has put in a higher low in the past couple of weeks, but Churchill Downs (CHDN) and Madison Square Gardens (MSG) have also broken out above their late March highs which is another constructive technical sign.  The next resistance to watch will be their moving averages. Start a two-week free trial to Bespoke Institutional to access our interactive tools and much more. 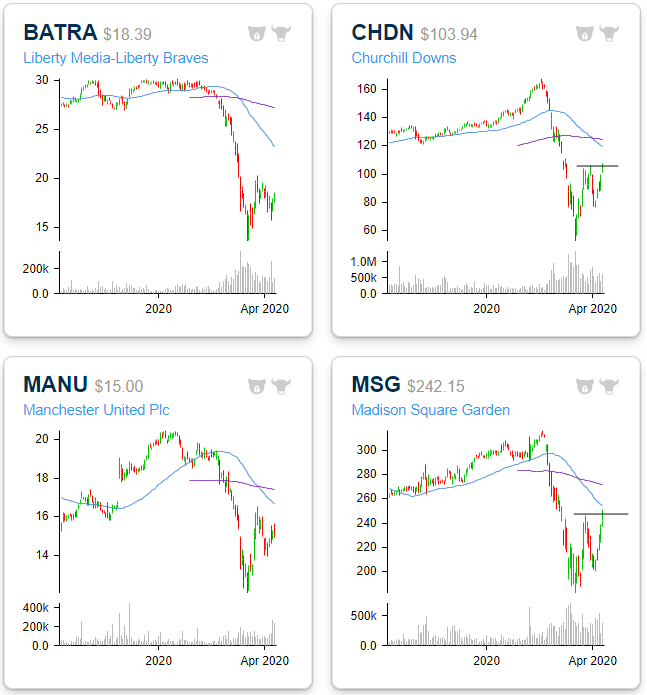