Speculators Step Away From the S&P

As we do each Monday, in last night’s Closer we recapped the latest data out of the Commitments of Traders (COT) report from the Commodity Futures Trading Commission. The report’s data is through last Tuesday and provides a breakdown of open interest for futures and options, though for our purposes we look at only the futures data.

By far the most notable area of last week’s report was the massive decline in net longs for S&P 500 futures.  Extending a string of four straight weeks of declines, the percent of open interest went from a high of 9.96% net long one month ago to a low of 2.57% net short per last week’s data. Of those weekly declines, last week’s 6.52 percentage point drop was by far the largest. In fact, it was the biggest one week decline in net positioning since the week of 3/22/11.  As shown in the second chart below, declines of more than 5 percentage points have been very rare in the post-financial crisis years, but in the late 1990s and early 2000s, large week-over-week moves were much more commonplace. 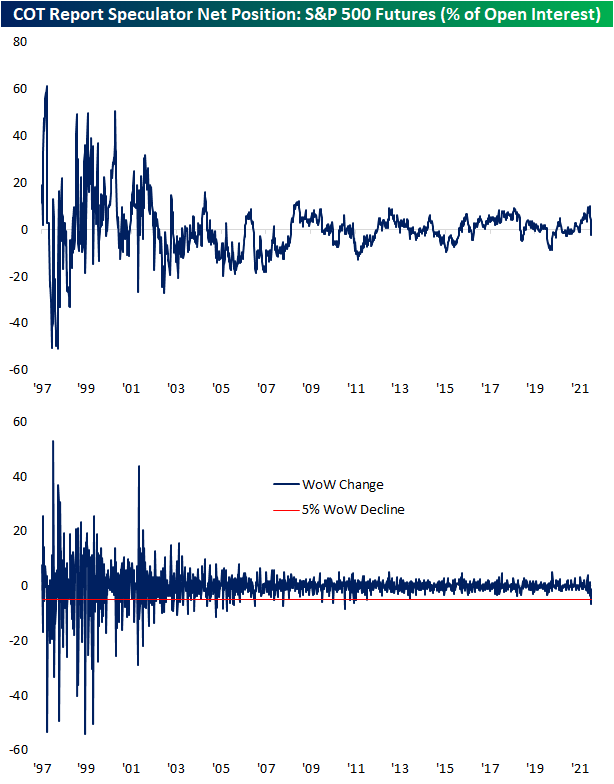 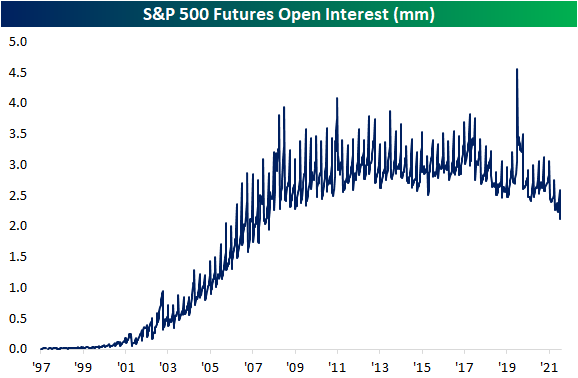 Going back to the start of the data in 1997, there have been 109 weeks (including last) in which positioning has fallen by at least 5 percentage points.  In the table below, we show the 16 occurrences of those that have at least 3 months between the prior instance.  The most recent occurrence is middling in terms of where net positioning stands and how large of a decline it was.  For example, the mid-2000s saw net short positioning in the mid-teens and those occurrences in the late 1990s and the first few years of the 2000s actually saw net long readings at the time of those declines; those declines were also some of the largest of these occurrences.

As for how stocks have done following these major shifts in positioning, the S&P 500 has managed to consistently move higher in the following week and month with larger than normal gains. Three months out, however, have seen median declines with positive performance less than half the time. Returns six months and one year out have been more consistently positive, but the median gains have been smaller than the norm. Based on prior experiences, large declines in speculator net positioning have implied mixed forward returns for the S&P 500 Click here to view Bespoke’s premium membership options. 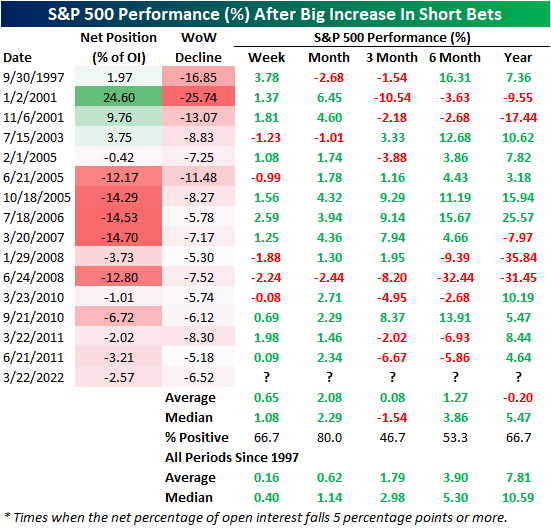