From its peak earlier this spring to its low earlier this month, the dollar had fallen over 7.5%. Around those recent lows there was a stretch of 12 straight days closing below its 200-DMA, as shown below. While the greenback managed to move back above its 200-DMA on Thursday and Friday of last week, it’s giving up the ghost this week falling around 0.5% yesterday and another 0.43% today as of this writing.  Yesterday’s decline brought it back below its 200-DMA. 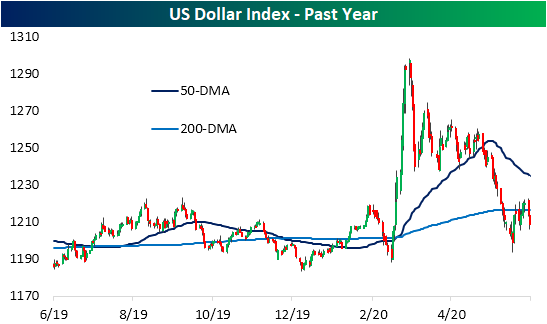 That decline comes on overall bearish sentiment for the dollar.  In our Closer every Friday, we include the Commodity Futures Trading Commission’s data from the Commitments of Traders Report on speculator positioning. Last week’s report showed a massive shift in open interest getting short on the dollar.  A net percentage of 26.9% are now short the dollar compared to +13.82% net long the prior week.  That 40.71 percentage point shift was the largest move in favor of speculators getting short behind a 48.47 percentage point decline back in September 2005 as shown in the second chart below. 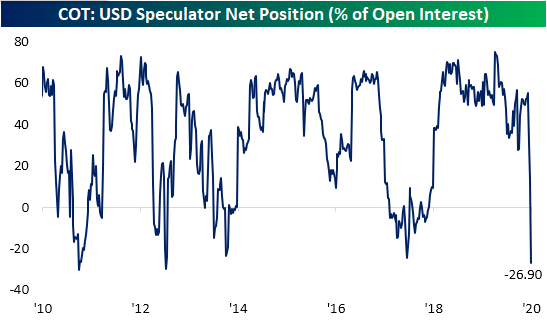 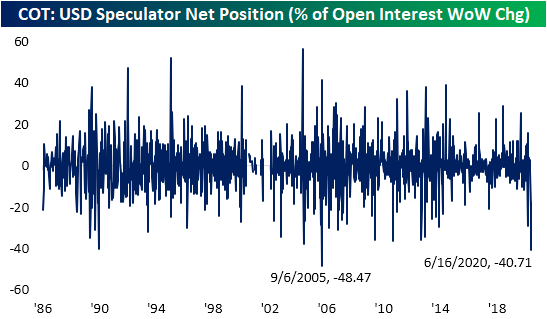 It is not just the dollar that speculators are short though.  As for US equities, 31.13% of open interest are net short the Dow.  That is the most pessimistic positioning speculators have taken on the index since August 2005.  For other indices like the S&P 500, positioning is not as extreme but similarly holds a bearish bias.  Click here to view Bespoke’s premium membership options for our best research available. 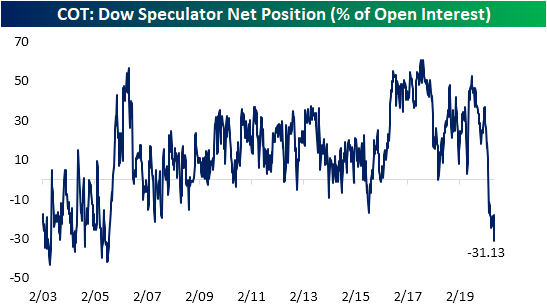