The latest CFTC’s Commitments of Traders report with data as of last Tuesday was released on Friday. This report tracks how speculators are positioned among various futures which we show as a net reading in the charts below.  Positive readings indicate a net percentage of open interest is long whereas a negative reading indicates a larger share of speculators are positioned short in a given future. Below, we take a look at those readings for a handful of precious metal futures.

As shown, gold has rarely seen more shorts than longs over the past decade and is the only precious metal currently positioned net long (+22.29%).  However, that is not to say this reading has not been weakening lately.  This past spring, the reading fell outside of the past few years’ range, reaching a low of 18% back in mid-July.  While the second half of July and some of August saw it rebound, last week marked three straight weeks of declines. Meanwhile, silver futures have seen positioning turn outright short recently. With a net 9.24% of open interest positioned short, that is the most pessimistic positioning reading since May 2019.  Likewise, it has been almost four years since platinum has been as heavily bet against as now.  Finally, palladium has also seen speculators turn against it in the past year to a degree not seen at any point of the past decade.

As we do each Monday, in tonight’s Closer we will provide a more in depth rundown of this data for a wide variety of assets. 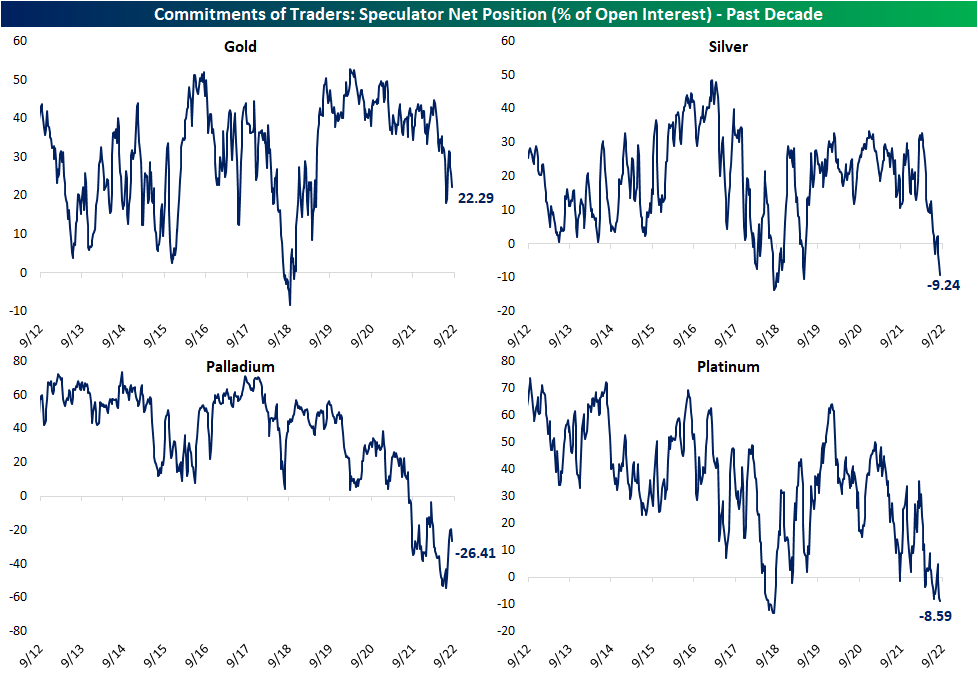 As speculators turn increasingly bearish, we are actually coming off of a very strong week for metal adjacent ETFs.  As shown in the screenshot of our Trend Analyzer below, the best performing ETFs last week in our US Groups screen were gold miners (GDXJ and GDX) as well as the Steel ETF (SLX) that tracks steel producers and suppliers.  The Junior Gold miners (GDXJ) rallied double digits over the prior five days, which was a move that lifted it out of extreme oversold territory and almost back up to its 50-DMA.The Gold Miners ETF (GDX) was not far behind with an 8.85% rally.  SLX was only a percentage point behind that as it presses into overbought territory for the first time since August 29th.  Click here to learn more about Bespoke’s premium stock market research service.