S&P 500 Streak Above the 10-Day Average in Jeopardy

As we highlighted in an earlier blog post and in last week’s Bespoke Report, the S&P 500 has pretty much been moving in a single direction over the past month, and that direction is up.  Given this run, as of yesterday’s close, the S&P 500 has closed above its 10-day moving average for 29 consecutive trading days.  The last time the S&P 500 closed below the 10-DMA was on October 9th.  Even intraday, the index only briefly dipped below the 10-DMA once on November 14th.  While it is on the ropes today as the S&P 500 has tipped below the average intraday, that 29-day streak is notable.  In the past 20 years, there have only been a handful of longer streaks. One of these occurred earlier this year ending at 40 trading days in early March. The current streak would need to last for another two and a half weeks if it is to take out both this streak and the longest of the past 20 years from 2010. That lasted for 42 consecutive days. 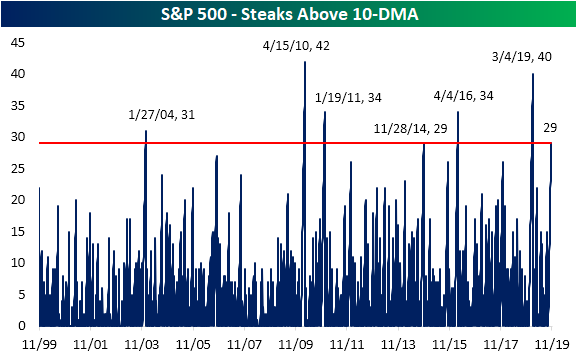 One more point on the S&P 500’s momentum: yesterday also marked just the third day where the S&P 500 fell this month.  As the S&P 500 trades lower today, down about 0.77% as of this writing, the index is looking at its first back to back decline since October 8th.  That is a streak of 30 consecutive trading days without a back to back decline.  While the streak for days above the 10-DMA is impressive, this streak is even more impressive.  The only other time in the past twenty years that ran as long was back in 2005; ending on the 30th day.  The only longer streaks occurred way back in 1955 and 1950, and both were 37 trading days. 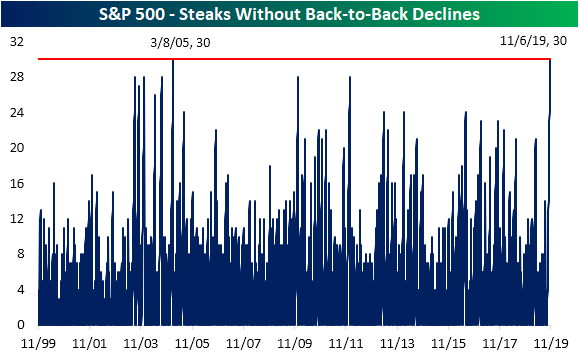 Combining these two criteria, the S&P 500 has spent 29 days above the 10-DMA without also experiencing back-to-back declines.  Back in 2004, there was one streak nearly as long at 28 trading days, but in the history of the S&P 500, there has only been one other such run that was longer. That was in 1955, ending at 36 days. Start a two-week free trial to Bespoke Institutional to access the Bespoke Report and other research. 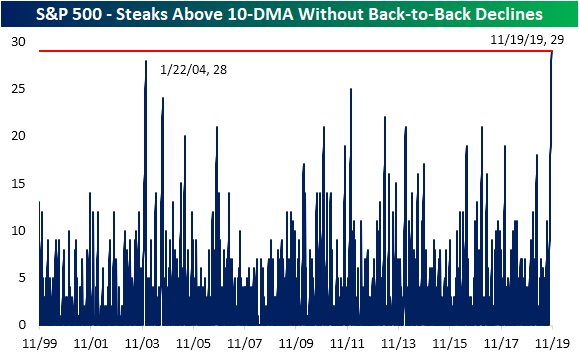