This morning’s jobs report shocked the financial world — most notably the economists whose job it is to provide estimates.  The consensus estimate among economists for May nonfarm payrolls was projecting a loss of more than 7 million jobs.  The actual number that was reported did not just show a smaller than expected job loss, but it actually showed a gain in jobs of more than 2.5 million.

We’re seeing a similar situation play out in the equity analyst community.  With the S&P 500 now up 40%+ since its low less than three months ago, the average stock in the index is now trading above its consensus analyst price target that looks 12 months out.  Analysts have simply not been able to catch up to the rapid rise we’ve seen for equity prices.

It’s extremely rare to see share prices move above consensus analyst price targets.  We don’t have the historical daily data on this, but anecdotally we can’t remember a time when the spread has been this wide.  As shown below, at the end of 2019 when the S&P finished a massive rally, equity prices were 5.5% below the consensus price target.  That was seen as a very tight spread prior to what we’re seeing now.  At the lows in March, the average share price had dropped all the way to $92.50 compared to an average consensus price target of $143.20.  That projected a gain of 54.9% at the time!

Since March 23rd, the average share price has risen from $92.50 up to $138.40, while the average analyst price target has fallen from $143.20 to $136.  Current price targets no longer project a gain for the average S&P 500 stock, but rather a 1.7% drop.  Click here to view Bespoke’s premium membership options for our best research available. 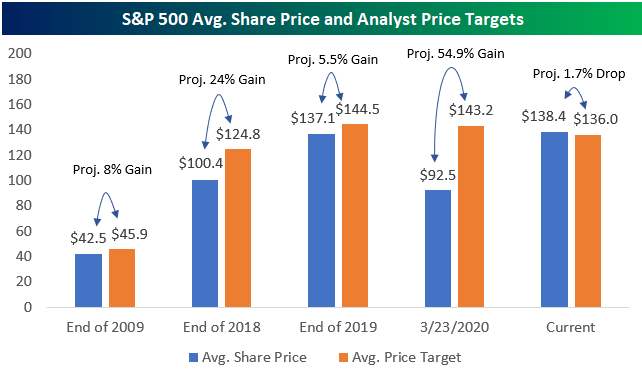