May has moved back to the rearview mirror and with that, we wanted to provide an update on how current long-term returns for the S&P 500 stack up relative to history.  The chart below compares the trailing one, two, five, ten, and twenty-year annualized total returns of the S&P 500 to the S&P 500’s historical average returns over those same time periods since 1928. 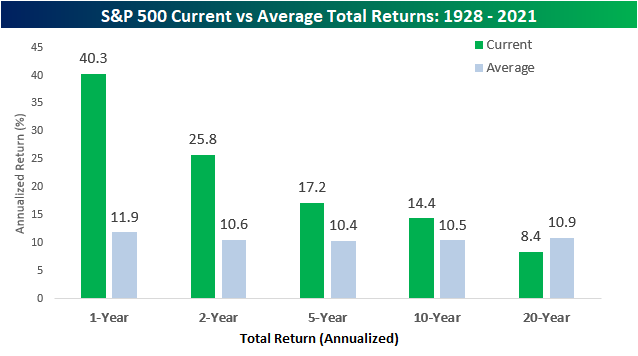 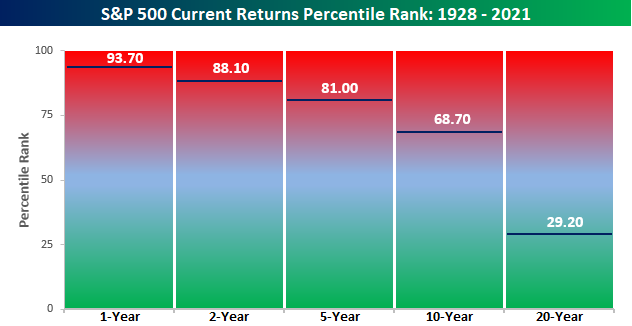 Throughout history, many investors have always worked under the assumption that long-term returns for the equity market are about 10%.  History has shown that to be the case over the last decade at least, as the average annualized one-year gain of the S&P 500 has been well above 10%.  With the S&P 500’s current 20-year annualized gain currently at just 8.4%, though, what will it take for the S&P 500 to reach double-digit gains on an annualized basis over a 20-year window?

For an idea, given the strong performance of the last ten years, a number of commentators suggest that the next ten years for equities will be weak with a reversion to the mean.  Only time will tell, but if we operate under the (unlikely) assumption that the S&P 500 stays at the exact same level it is now going forward for the next ten years, its annualized twenty-year return would top 10% for the first time since August 2008 next September.  After that brief period above 10% from September 2022 through March 2023, it wouldn’t again top that level until February 2029.  In spite of the fact that the annualized 20-year return would top 10% in those two periods, though, it still wouldn’t get as high as the historical average of 10.9% in either of those periods.  This reflects the fact that although the last ten years for US equities have been very strong, they also came shortly after one of the worst ten-year periods for US equities on record.  Click here to view Bespoke’s premium membership options. 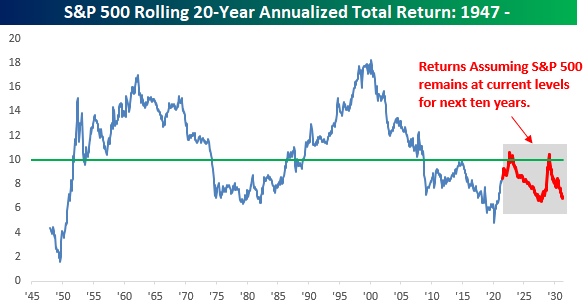