The S&P 500 has been on a seemingly uninterrupted run higher over the last several days, but by some measures, it may not be as extended as you would think.  The chart below shows the historical percentage spread between the S&P 500 and its 50-day moving average (DMA) over the last three years.  Through Thursday’s close, the S&P 500 was 3.2% above its 50-DMA, which is relatively high but nowhere near an extreme.  The red line in the chart below shows the current percentage spread between the S&P 500’s price and its 50-DMA.  There have been a number of times since the 2016 election where this spread was higher with the most recent being back in July.  In fact, 17% of all prior days in the last three years have seen the S&P 500 close at a higher level relative to its 50-DMA than it is now.  That doesn’t mean the market isn’t overbought, but it’s not exactly at unprecedented levels either. Sign up for Bespoke’s “2020” special and get our upcoming Bespoke Report 2020 Market Outlook and Investor Toolkit. 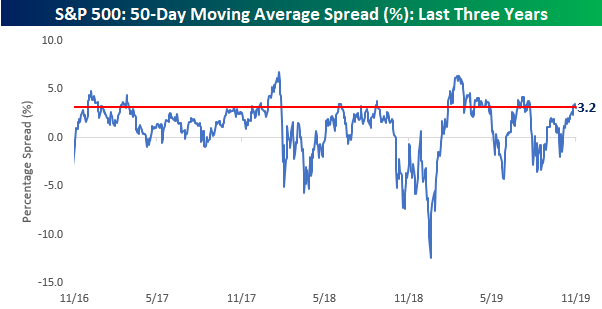