The S&P 500’s market cap has increased by more than $6 trillion this year, leaving the index’s total market cap above $40 trillion.  As shown below, the Technology sector makes up more than a quarter of the index’s market cap at nearly $11 trillion.  The next closest sectors are all right around the $5 trillion mark — Consumer Discretionary, Health Care, Communication Services, and Financials.  There are also four sectors that barely add up to $4 trillion combined: Energy, Real Estate, Materials, and Utilities.  The four largest stocks in the S&P 500 — Apple (AAPL), Microsoft (MSFT), Alphabet (GOOGL), and Amazon (AMZN) — have a combined market cap that is $8.3 trillion, more than two times the size of the four smallest sectors. 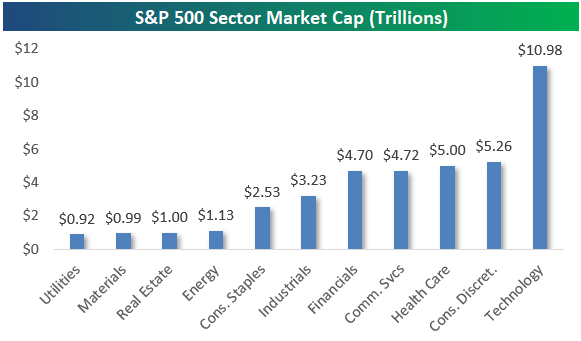 While the Technology sector ranks in the middle of the pack in terms of year-to-date performance, on a market cap basis, it has easily increased the most of any sector this year.  As shown below, Tech’s market cap has increased by nearly $1.7 trillion so far in 2021.  The next closest sector is Financials with an increase of $1.1 trillion.  So far this year, every sector has seen an increase in market cap, with the Utilities sector increasing by the smallest amount at roughly $48.5 billion. 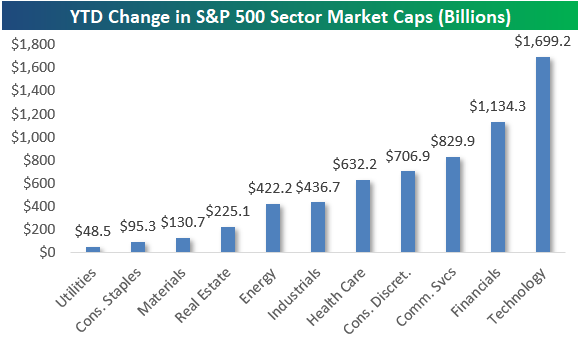 Below is a quick snapshot of the 25 largest stocks in the S&P 500 at the moment.  Apple (AAPL) and Microsoft (MSFT) are the two largest and the only members of the “$2 trillion club.”  Alphabet (GOOGL) and Amazon (AMZN) rank 3rd and 4th with market caps of more than $1.7 trillion.  There’s a big drop-off after the “big 4” of AAPL, MSFT, GOOGL, and AMZN.  Facebook (FB) ranks 5th with a market cap of $916 billion, while Tesla (TSLA) has moved up to the #6 spot at $845 billion.  With Facebook declining recently and Tesla rallying, the market cap spread between the two is now at just $71 billion.  Berkshire (BRK/B), NVIDIA (NVDA), Visa (V), and JP Morgan (JPM) round out the top ten.

As you can see, all of the stocks on the top 25 list now have market caps of $250 billion or more. 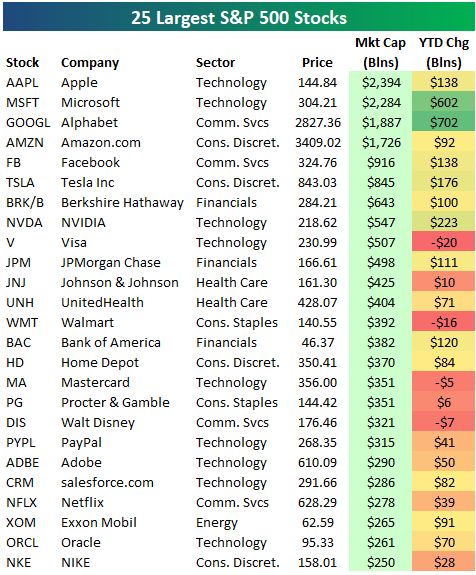 In terms of the biggest market cap gainers so far this year, there’s Alphabet (GOOGL) and Microsoft (MSFT), and there’s everyone else.  GOOGL has seen the biggest gain in market cap with an increase of $702 billion.  There are only six stocks in the S&P 500 that currently have total market caps of more than that amount!  The $702 billion gain for GOOGL is also larger than the total YTD gains in market cap for seven of the eleven S&P 500 sectors. 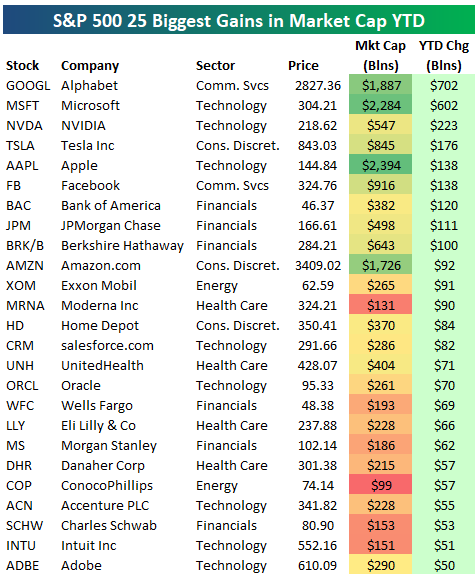