Friday’s rally in the S&P 500 helped to bring the S&P 500 right back within spitting distance of its record closing high from right before Thanksgiving and back up above 25% in terms of its YTD gain.  While the S&P 500 wasn’t quite able to close at a new high last Friday, a number of groups did, and in most cases, these are also the most extended groups in the market.

Topping the list is Health Care Equipment and Services.  While the group has trailed the S&P 500 on a YTD basis with a gain of just below 21%, it is nearly 7% above its 50-day moving average and closed at a 52-week high on Friday.  Besides Health Care Equipment and Services, the next five groups that are trading the furthest above their 50-DMAs also closed at 52-week highs on Friday. Two other groups also closed at 52-week highs on Friday but are less extended relative to the 50-day than the S&P 500.  Consumer Durables is up 28.5% YTD but is just 3.3% above its 50-DMA, while the Food Beverage & Tobacco group is just 2.5% above its 50-DMA and sitting on a YTD gain of 18.8%.

While the groups mentioned above have been leading the market heading into this week, there are actually three times as many groups less extended than the S&P 500 as there are groups that are more extended (from their 50-DMAs).  The biggest laggards have been Real Estate and Utilities.  Both groups are more than 3% below their 52-week highs as well as below their 50-DMAs.  The only other group below its 50-DMA is Retailing which is pretty disappointing given that Christmas is just eleven days away.  While Retailing is still up over 21% YTD, it is one of just four groups that are down 5%+ from their 52-week highs.  The others are Consumer Services, Autos & Auto Components, and Energy.  Energy has by far been the biggest disappointment in the equity space this year as it’s down nearly 14% from its 52-week high and up only 3.26% YTD.  Start a two-week free trial to Bespoke Institutional to access our research reports, interactive tools, and more. 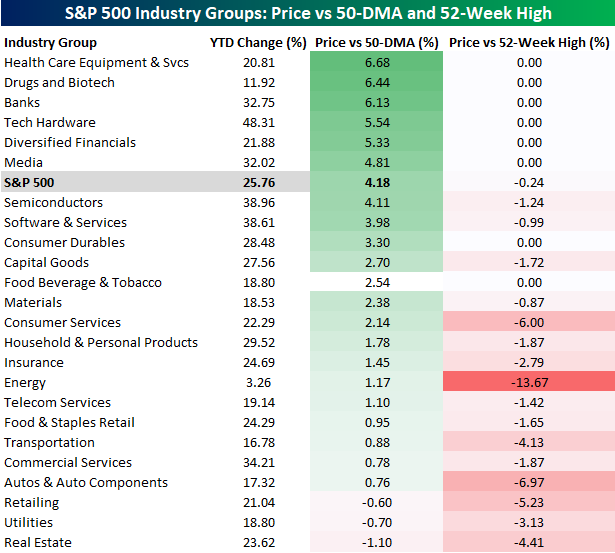