Looking at the S&P 500’s industry groups, every one is now up over the last week since last Monday’s low.  The only standout is the Food & Staples Retailing group which is only up 1.3%.  But as we frequently highlighted last week, that is a result of it being the group that also held up the best during the time between the 2/19 peak through last Monday’s low.  In fact, that industry is currently the one that is closest to its 52 week high at 11%.  The Consumer Durables and Apparel group, on the other hand, has performed the best over the past week rising nearly 30%.  That comes as it was one of the most beaten down sectors, nearly being cut in half during the initial COVID crash. Even with the recent rally, that still leaves it another 31.65% below its 52-week high.

The size of the declines over the past month and a half have erased a lot of the past few years of progress.  There are currently only five industry groups higher than they were one year ago.  Only half are up over the past two and three years.  Fortunately, over a longer time horizon—the past five years—the majority of industries are still higher with some industries like Software and Services, Semiconductors, and Retailing still up around 100% or more. Autos and Energy, however, are both down more than 50% over the last five years.  Start a two-week free trial to Bespoke Premium to see our list of “Stocks for the COVID Economy.” 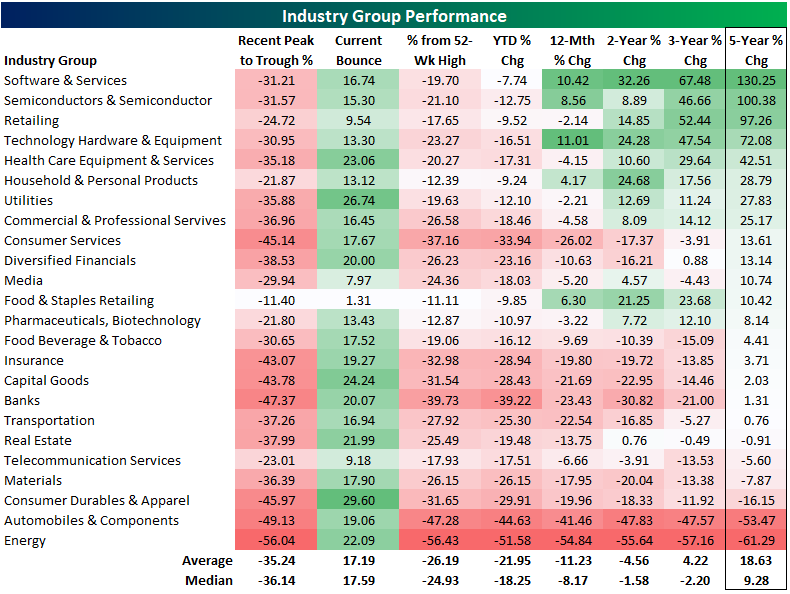