Equity markets have become a bit wobbly in the last week or so, but breadth, in terms of large-cap industry groups, still remains pretty robust.  Relative to their 50-DMAs, all 24 S&P 500 industry groups still have rising 50-DMAs.  When you consider the fact that the 50-day window spans the period going back to early April, a period encompassing most of what was one of the strongest 50-day rallies on record, the fact that every industry group has a rising 50-DMA isn’t all that surprising. 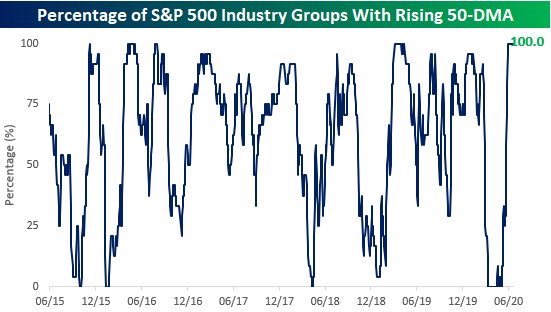 Even though all their 50-DMAs are rising, not every industry group is currently trading above its 50-DMA. While the reading briefly reached 100% in late May and early June, two industry groups have since pulled back below their 50-DMAs, putting the percentage at a still impressive 91.7%. 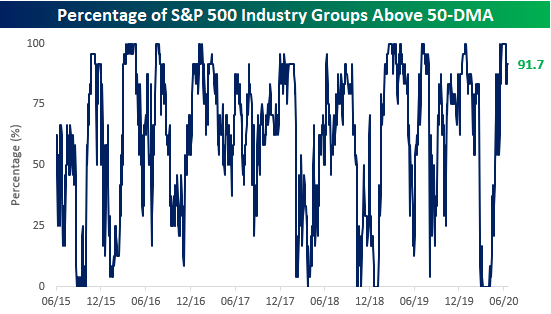 On a YTD basis, the S&P 500 is down less than 4%, but for the vast majority of industry groups, performance has been worse than that.  Of the 24 groups shown, 16 are down more than 4% YTD, including eleven that are down over 10%. The worst performers of these losers include Energy, Banks, and Autos.  While Energy gets most of the attention for being so weak, Banks are essentially down just as much!  On the upside, just two industry groups are up over 10% (Retailers, which is basically Amazon, and Software & Services).  Retailing is also the one industry group that is within 1% of a 52-week high and one of seven that is within 4% of a 52-week high. Click here to view Bespoke’s premium membership options for our best research available. 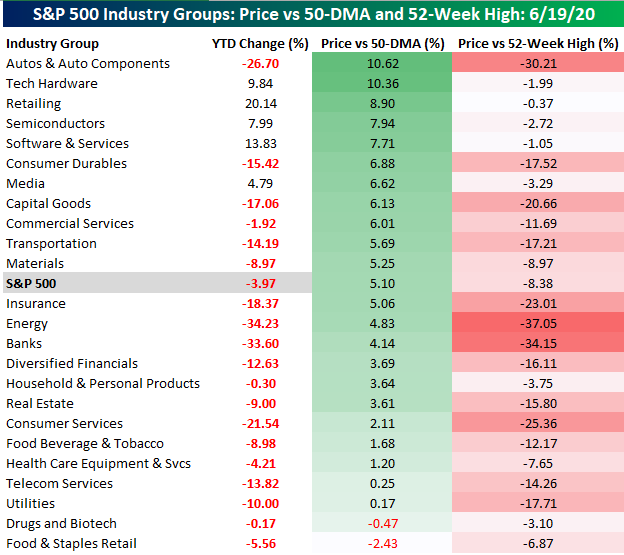