Below is an updated look at the average performance of the S&P 500 (SPY) by weekday so far in 2019.  As shown, Monday has been the only day of the trading week that has averaged a decline so far this year, but Tuesday has bounced back with an average gain of 0.12%.  Wednesday has seen a small gain of 0.04%, but Thursday and Friday have both been very solid days this year.  Thursday has seen the S&P average a gain of 0.16%, while Friday has closed out the week with an average gain of 0.17%.  For all days this year, SPY has averaged a gain of 0.09%.  That’s all you need per day to get to a 20% YTD gain through 10.5 months. 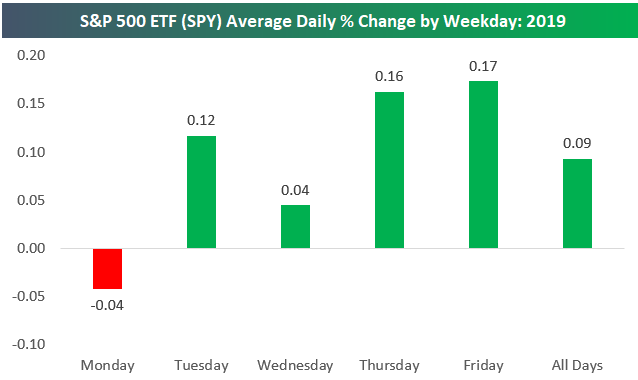 Friday has seen strength at the open with an average gap higher of 0.11%.  Intraday action on Fridays has been strong as well with an average open to close gain of 0.07%.  With all the strength on Friday, investors haven’t been worried about holding equities over the weekend this year even with all the concerns over trade and geopolitical issues.  They do come into the new trading week with some worries, though, given the Monday gaps down.  Join Bespoke Premium now to get Bespoke’s most actionable stock market research.  Click here to get your first 14 days free. 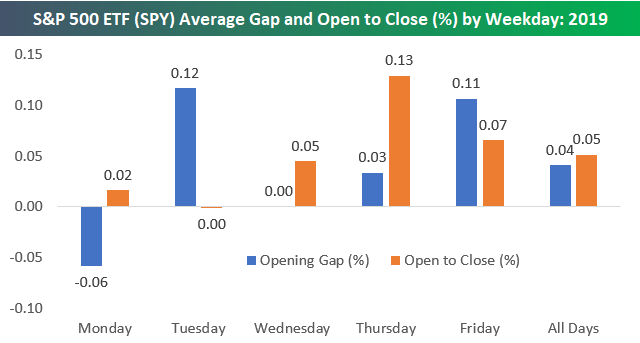