As the year and decade winds down, no recap would be complete without a discussion of the best-performing stocks of the decade.  Since the S&P 1500 is up close to 200% in the last ten years, there have been a number of big winners.  In the table below we list the 25 best-performing stocks that are currently in the S&P 1500 that were also around in their current forms ten years ago. Topping the list of biggest winners is a company most people have never heard of – Patrick Industries (PATK). Ten years ago, the stock was a microcap with a market cap of just $22.3 million, but during the last ten years, PATK’s stock has rallied more than 4,500%! So what cutting edge technology is PATK involved with?  5G? AI? The Cloud? No, no, and no.  According to the company’s website, PATK is a major manufacturer and distributor of component and building products for the Recreational Vehicle, Manufactured Housing and Marine industries.  There you have it.  Not every big winner in the stock market has to be a tech company.

While you may have never heard of PATK, the next two stocks on the list are much more of household names.  Netflix (NFLX) has rallied just under 4,000% in the last decade while Domino’s (DPZ) is up over 3,300%.  Can you think of a better way to spend a cold winter afternoon than watching Netflix and dialing up some Domino’s?  Besides these three names, other notable stocks on the list of biggest winners include Broadcom (AVGO), United Rentals (URI), Regeneron (REGN), Ulta Beauty (ULTA), and Amazon.com (AMZN).  Although AMZN already had a market cap of $58 billion ten years ago, it has defied all growth expectations and still managed to rally more than 1,200% this decade.

When it comes to market cap, AMZN is clearly the exception more than the rule.  So if you are looking to score one of the biggest winners in the next decade, you’re unlikely to find one among the FANG stocks or in the mega-cap S&P 100 for that matter.  Besides the 25 names listed below, another 17 have rallied more than 1,000% over the last ten years.  Of those 42 total names, only three had market caps above $10 billion (Amazon.com, NVIDIA, and Mastercard), and just 15 even had market caps above $1 billion.  Overall, the average market cap of the 42 ten-baggers was $3.3 billion at the start of the decade, while the median market cap was just $565 million.

The fact that most of the biggest winners of the last ten years weren’t large caps to begin with certainly doesn’t mean that large-cap stocks are a bad investment. There are plenty of stocks that, even though they weren’t the best performers, still performed admirably over the last ten years.  Additionally, while the last decade has been great for the stock market, in the event that the next decade isn’t as good, large-cap stocks are likely to collectively provide a lot more stability than their small and micro-cap peers.  Click here to join Bespoke Premium with a special offer and gain access to our full 2020 Outlook report. 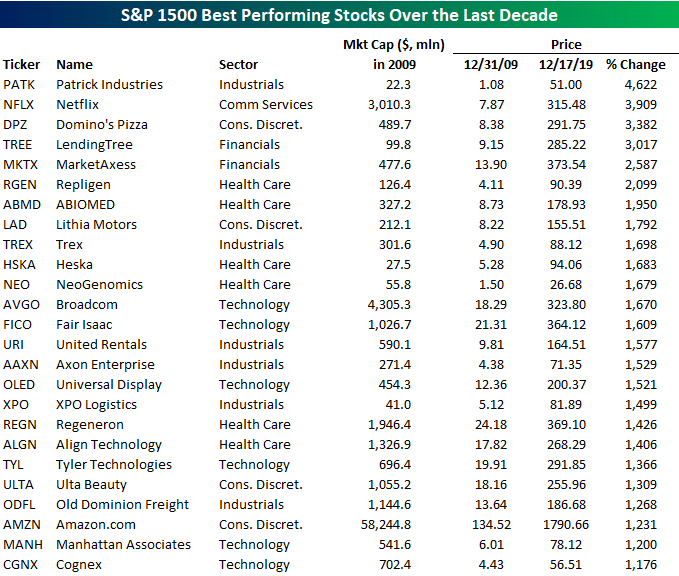