Yesterday, the Biden administration announced plans for a new federal program to support solar panel manufacturing via removal of import tariffs. In response, solar stocks proxied by the Invesco Solar Energy ETF (TAN) ripped higher gaining 4.26% on the day. Although TAN actually saw an even larger 5.5% single-day gain just last Thursday, yesterday’s move does rank in the top decile of all daily moves on record for the ETF. Perhaps more importantly, that also marked the first time the ETF moved above its 200-DMA intraday since December. However, those gains did not hold as TAN moved a few cents back below its 200-DMA by the close, and today it continues to hover slightly below that moving average. We would also note those levels are smack dab in the middle of the past year’s range and are at similar levels to the low end of the second half of last year’s range. In other words, solar stocks may have gotten a boost from the news yesterday, but the technical picture is at a bit of a crossroads and not decisively positive. 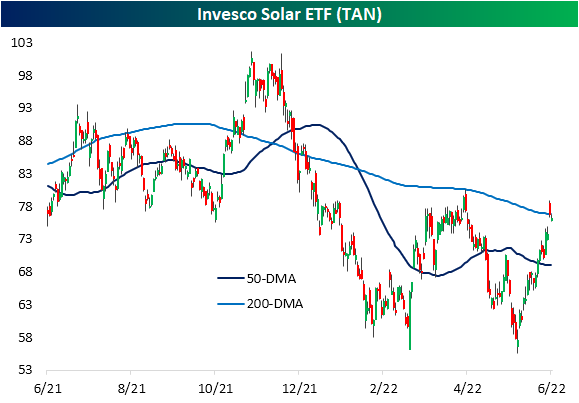 As solar stocks struggle to decisively make a move above their 200-DMA, the First Trust Global Wind ETF (FAN) is only managing to move above its 50-DMA.  Even though also a part of the clean energy space, wind-related clean energy stocks did not receive much of a bump from yesterday’s news as the group was only a modest 1% higher at the intraday highs compared to an over 7% gain for TAN at its highs. As FAN still needs to rally another 4.7% before joining solar stocks in testing its 200-DMA, the overall technical picture for FAN has been much less positive. The past year’s downtrend is more defined as the ETF has repeatedly failed to move back above its 200-DMA over the course of the past year with the most recent attempt being earlier this spring. 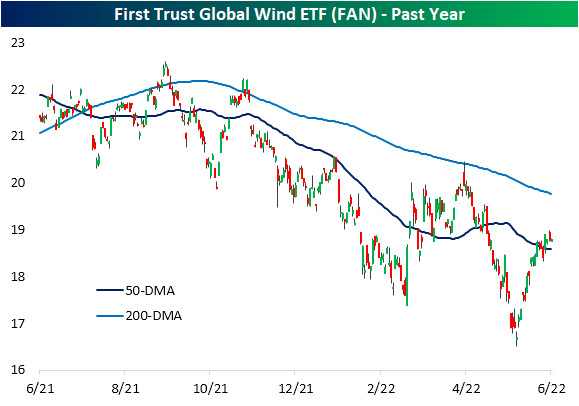 While solar shows a bit more promise than wind from a technical standpoint, overall the picture hasn’t changed much for clean energy as a whole. The largest clean energy ETF, the iShares Global Clean Energy ETF (ICLN), has likewise been stuck under its 200-DMA; having come up short yesterday following the rally off of the 52-week low last month and another failed attempt to move above its 200-DMA in April. 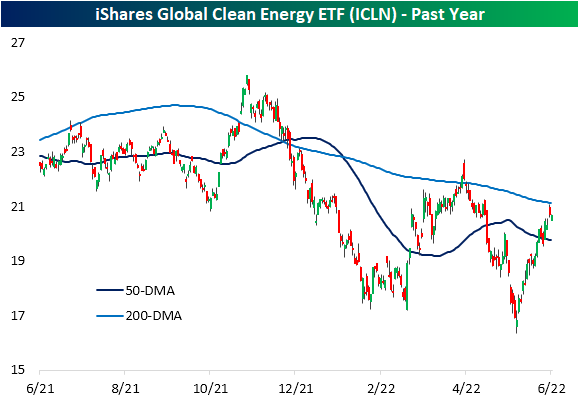 At the moment, clean energy stocks have failed in breaking out, but versus the broader market the move certainly stands out. In the chart below we show the relative strength line over the past five years for the Solar Energy ETF (TAN) versus the S&P 500 (SPY).  Beginning in late 2018 that line was consistently on the rise followed by an enormous surge in the second half of 2020 through the end of the year.  That steep rise in the line means this cohort of stocks experienced massive outperformance relative to the S&P 500. Of course, as fast as it went up, the line came crashing back to Earth in the first half of 2021 with further follow-through up until earlier this year. In late January, the relative strength line made its way back down to and successfully tested the longer-term and more gradual uptrend line off the late 2018 levels, and that continued to hold throughout the spring.  In the past couple of weeks and especially after yesterday’s surge, the line has dramatically broken out of the past year and a half’s downtrend.  Click here to learn more about Bespoke’s premium stock market research service. 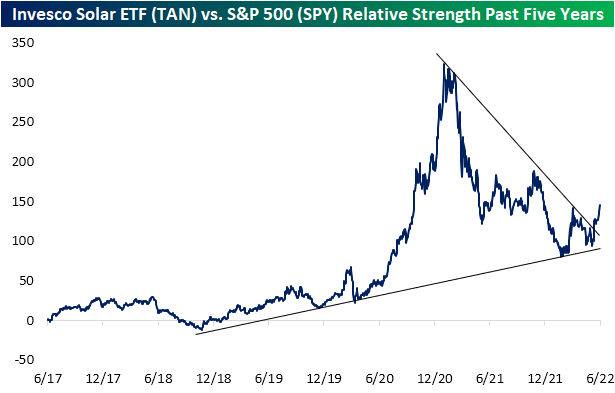