Over the past several weeks, two of the more significant trends have been the collapse in crude oil prices and the outperformance of momentum names that we have made note of multiple times in the past week (see The Closer from last night and last Thursday). One area that there is some cross over of these two trends is with renewable energy stocks. These stocks related to oil alternatives have certainly had momentum behind them recently. Since its March 23rd low, the Solar ETF (TAN) has been in a steady uptrend gaining 47.16%. Meanwhile in the land of fossil fuels, the crude oil ETF (USO) is down nearly the same amount since March 23rd (-46%) even though at the moment it is around 25% off its lows on April 28th. With USO still beaten down and TAN continuing to rally, the ratio between the two has gone vertical (second chart below) meaning TAN has been outperforming USO by its widest margin since it first began trading in 2008. 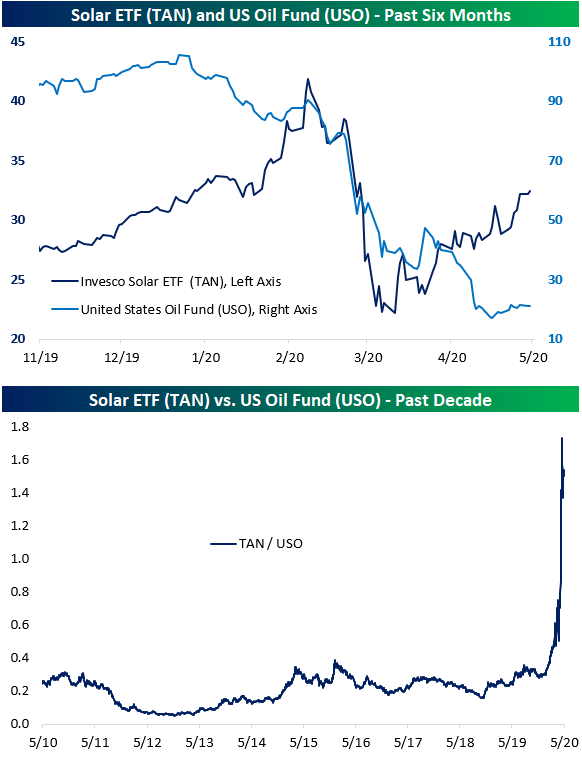 Also notable today is TAN’s largest holding: Enphase Energy (ENPH). Last week, ENPH reported a solid quarter in which the company beat EPS and sales estimates, but lowered guidance. Despite that lowered guidance, snapping a streak of four straight Triple Plays, the stock popped 18.73% and it has continued to rally through today. Between yesterday and today’s gains, the stock is breaking out from its February highs. Start a two-week free trial to Bespoke Institutional to access our Chart Scanner, Earnings, Explorer, and much more. 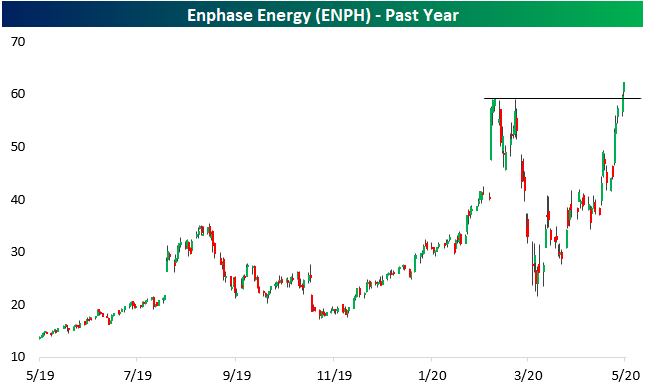