Looking across the ETFs in the US Groups screen of our Trend Analyzer, by far the best performer over the past week has been the Solar ETF (TAN). In just five days, TAN has managed to rally 11% roughly cutting in half what had been a 20% YTD decline through last week.  Even after that rally though, after stellar returns last year, TAN is still the worst performer of this group of ETFs in 2021.  Given it had traded in oversold territory for most of the past two months, TAN’s recent rally has not even been enough to bring the ETF back above its 50-DMA.  TAN is not alone in being an ETF to see rotation in the past week after YTD weakness though. For example, biotech ETFs like the S&P Biotech ETF (XBI) and Nasdaq Biotechnology ETF (IBB) have both been strong over the last week after underperforming YTD,

Not all YTD losers have seen outsized gains in recent trading though. Both gold miner ETFs – GDX and GDXJ – are down YTD but have only seen marginal gains over the last week.

The Steel ETF (SLX) has also gone on an impressive run in the last week as the fourth best performing ETF in the screen. That has helped make it one of the strongest YTD performers putting it into extreme overbought territory as it trades 13% above its 50-DMA. 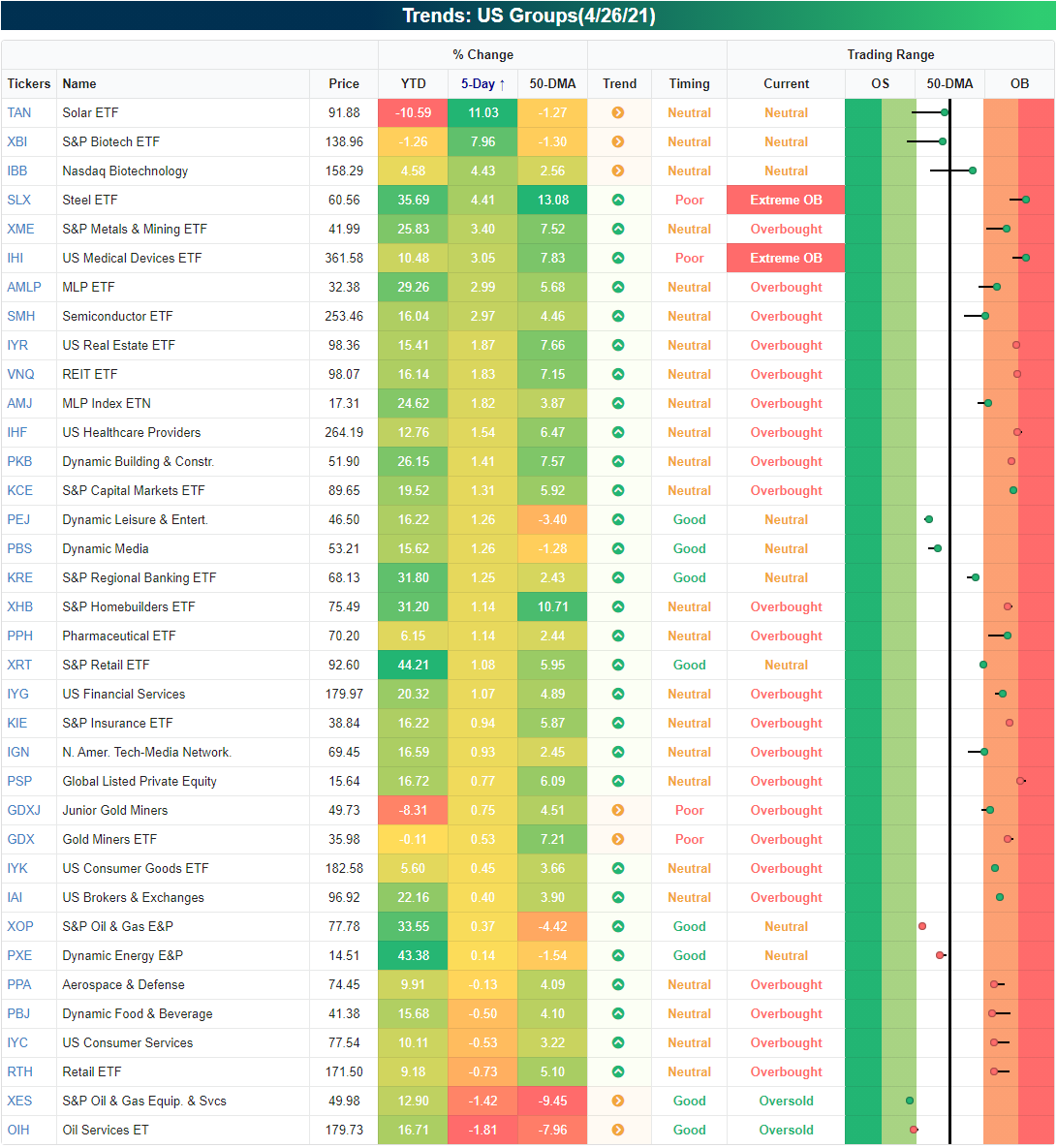 Some of these recent moves have resulted in some interesting developments in the various charts of these same ETFs which we show in the snapshot of our Chart Scanner below. Circling back to the gold miners, GDX has been in rally mode over the past couple of months resulting in it moving back above its 50-DMA and breaking its downtrend in the process. That does not mean GDX is totally out of the woods. So far the ETF has come up short of its 200-DMA which will be an interesting area of resistance to watch going forward.  Similarly, after erasing some of the huge run in 2020, TAN (bottom left) managed to find support around $81 at multiple points in the past several weeks with the most recent test of this level being exactly a week ago.  The huge 11% rally in the days since has brought it back up to its 50-DMA which it so far has failed to move back above.  Conversely, IBB had been stuck between both its 50 and 200-DMAs since late February, but the recent bounce off of its 200-DMA preceded a breakthrough of its 50-day to the upside that has taken place over the past few days.

As for the other ETFs in our US Groups screen, there are multiple ones like the North American Tech-Multimedia Networking ETF (IGN), Semiconductors (SMH), and Regional Banking ETF (KRE) that have been rallying off of their 50-DMAs and moving back up towards 52-week highs. In the case of IGN, that has resulted in what appears to be an upside break of the past few months’ wedge pattern.  There are also other breakouts to new 52-week highs like for the US Financial Services ETF (IYG) and the S&P Metals and Mining ETF (XME). Click here to view Bespoke’s premium membership options for our best research available.