We’ve discussed the S&P 500’s rangebound trading pattern of the last 20+ months numerous times here and in our client research, but in the short term, we’re seeing what’s an even tighter range for the S&P 500 Software group.  As shown in the chart below, ever since the start of August when the group initially sold off, the 50-day moving average (DMA) has been acting as an anchor on the group’s price.  To the upside, the group hasn’t traded more than 2% above its 50-DMA, while the maximum downside damage has been limited to less than 4%.  In between, the group has had more than 25 crosses of its 50-DMA. 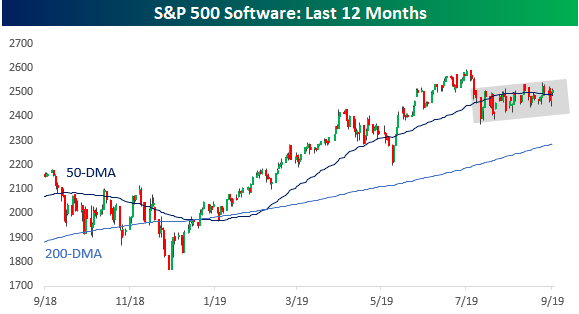 While the Software group is stuck next to its 50-DMA, individual stocks are trading all around the 50-DMA.  The chart below is from our Trend Analyzer tool and shows where each of the 12 stocks in the group are trading relative to their 50-DMA along with how they’ve traded YTD.  Currently, three stocks in the group are on the verge of being oversold – Cadence Designs (CDNS), Fortinet (FTNT), and Intuit (INTU).  At the other end of the spectrum, another three stocks are overbought – ANSYS (ANSS), Synopsys (SNPS), and Microsoft (MSFT).  In between, the only three stocks that are hovering right near their 50-DMAs are Autodesk (ADSK), Oracle (ORCL), and salesforce.com (CRM).  The net result is that the overbought and oversold stocks essentially cancel each other out, leaving the group where it is now, stuck at the 50-day. Is this consolidation for the group the pause that refreshes or just a last-ditch effort to hang on to the year’s gains? Start a two-week free trial to Bespoke Institutional to access our interactive market tools and much more.