ISM’s monthly manufacturing report for the month of May was released this morning. For the first time since January, the headline manufacturing number was higher month over month, rising from 41.5 in April to 43.1 in May.  While that 1.6 point increase is an improvement, it’s still indicative of contractionary activity (anything below 50 is contractionary) as has been the case since the March report.  In other words, similar to what we have seen in the regional Fed reports, activity in May was still declining but not at as rapid of a pace as in April.

In addition to the headline index, most of the sub-indices also improved month over month in May albeit they are also still showing contractionary readings.  In fact, every index is still below 50 except for those of Supplier Deliveries and Inventories. Although those two are above 50, it is not necessarily a positive for broader activity as detailed below. Meanwhile, the only two indices that fell deeper into contractionary territory were those of Customer Inventories and Imports. 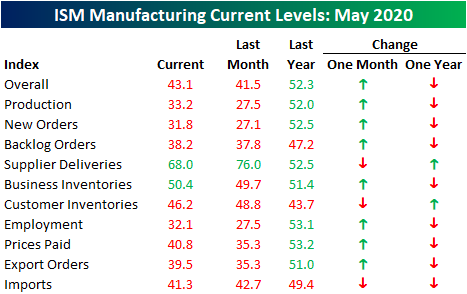 As we detailed last month, supply chains faced significant disruptions in April due to COVID-19 and that was reflected in the index for supplier deliveries which spiked to 76; its highest level since April of 1974. Higher readings for Supplier Deliveries indicates that delivery times are longer and lower readings indicate shorter delivery times. While May’s survey continues to show long delivery times, it did improve with the index falling 8 points to 68. That was the largest month over month decline for this index since an 8.2 point decline in October of 1981.

Business Inventories was the only other index to come in above 50 in May; reading 50.4.  That means business inventories expanded for the first time in a year (since May of 2019 when the the index was 51.4). ISM attributed that growth in inventories to businesses trying to get ahead of the aforementioned longer lead times in addition to all around weaker demand.

As previously mentioned, demand is understandably weak with New Orders coming in at 31.8.  That means nine of the last ten months have seen a contraction in New Orders with May being a fourth consecutive month.  That is despite the month over month pickup from 27.1 in April. The industries that are reporting growth in New Orders include Textile Mills, Nonmetallic Mineral products, Food, Beverage, and Tobacco, and Paper Products.

As a result of that weakness in demand in addition to issues with suppliers, the reading on Production also remains weak. Similar to New Orders, including this month there have been contractionary readings in eight of the last ten months. May marked a third consecutive month even with the 5.7 point month over month rise.  So again, things are still deteriorating but at a slower rate than in April. Of the previously mentioned industries that reported growth in New Orders, only Food, Beverage, and Tobacco, and Paper Products also reported growth in Production.  Additionally, the industries for Furniture and Wood Products also reported increased production.

Looking at the commentary section of this month’s report, it backs up some of the findings in the data and offers some other insights.  For example, one Transportation Equipment respondent reported that they have experienced “issues with suppliers that are affecting production.”  Interestingly, they also report that measures like social distancing are also having an impact while another respondent from the Machinery industry reported that they are evaluating the necessity of certain oversees operations.  Start a two-week free trial to Bespoke Institutional to access our interactive economic indicators monitor and much more. 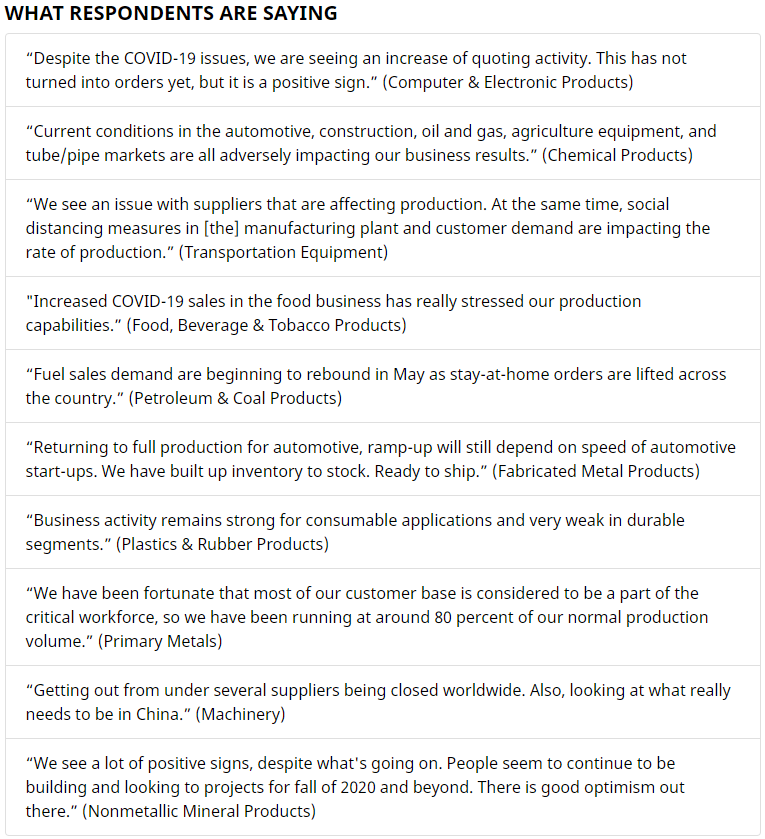