The recent underperformance of small caps has been partially attributed to rising current yields and assumed rate hikes in 2022. However, small caps have not historically always declined during periods when treasury yields have been on the rise. In fact, since 2000, the S&P 600 Small Cap Index has tended to outperform the S&P 500 during years when the 10-year yield rose. The first table below shows years when the 10-year yield increased, and for each year we also show the performance of the small-cap S&P 600 and the large-cap S&P 500.  In the nine prior years where the 10-year yield increased, the S&P 600 outperformed the S&P 500 by an average of 6.0 percentage points (ppts) and a median of 3.6 over the course of the year with outperformance 70% of the time.

In the second table, we show years where the 10-year yield declined, and in those years small caps still outperformed but by a more modest 2.4 ppts (median: 0.2 ppts).  This goes to show that not all small caps are negatively impacted by rates, but it is worth noting that the names in the S&P 600 tend to have positive earnings whereas the Russell 2000 has a larger number of unprofitable companies. The Fed has signaled multiple rate hikes in 2022, but based on historical trends it should not necessarily be interpreted as a negative headwind for small-cap stocks with positive earnings.

The worst year since 2000 for small caps relative to large caps was in 2019 when the group underperformed by 8.3 percentage points and in 2019, rates declined by 70 basis points. The best year for small caps on a relative basis was in 2000 when the 10-year yield dropped 148 bps and the S&P 600 outperformed the S&P 500 by 22.3 ppts. Click here to view Bespoke’s premium membership options. 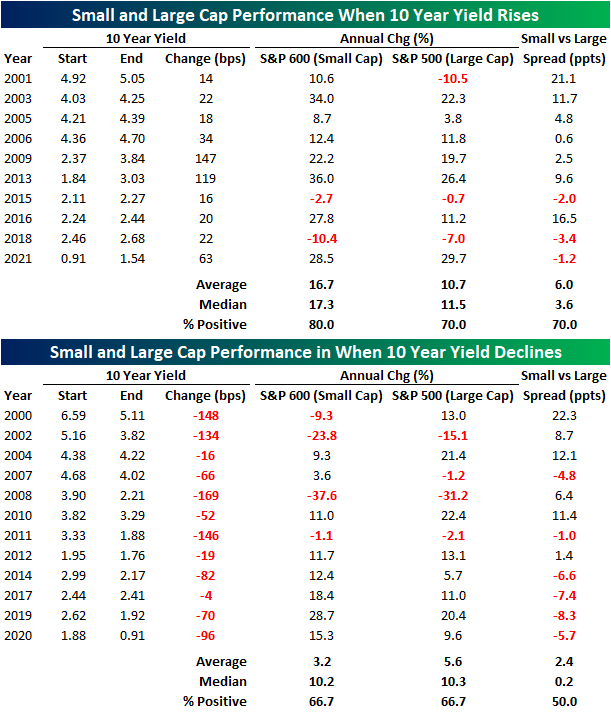