While the S&P 500 may still be within a couple of a percent of its record high from a week ago today, the magnitude of the decline in small caps has been much larger.  While it has seen a bit of a bounce intraday, at the open today, the Russell 2000 was down over 10% from its record closing high in mid-March. While the Russell 2000 is one of the worst-performing US indices in recent months, it remains within the range it has been trading in all year. 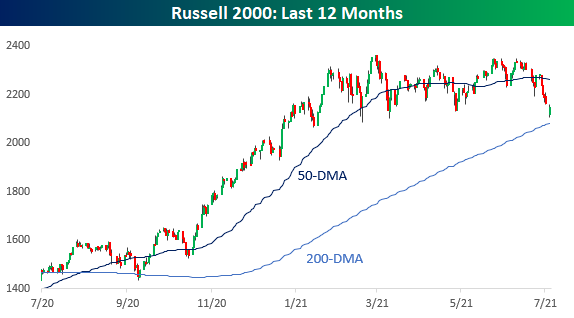 From a technical perspective, we consider a correction to be any decline of 10% (on a closing basis) from a closing high without a rally of 10% in between.  While the Russell 2000 was down 10% earlier today, if the current levels hold, it won’t quite reach the correction threshold on a closing basis.  In the chart below, we show every correction for the Russell 2000 going back to 1980 and its magnitude in percentage terms.  During this time, the Russell 2000’s average decline during a correction has been 18.2% (median: 15.4%), so with the current decline currently not even at 10%, there’s a decent amount of room between here and average levels.

While we may not be there in terms of the size of the decline, in terms of duration, the current period is already well above average.  The Russell’s closing high was all the way back on March 15th, so even if the decline ended today, it would be 126 calendar days, or more than 50 days longer than the average of 73 days and double the median of 63 days.

In the chart below, we show Russell 2000 corrections in terms of their duration in calendar days.  What’s really interesting to note about the current period is that at 126 days, it already would rank as the 7th longest correction in the Russell’s history.  When it comes to corrections, we always highlight that they can occur in terms of both time and/or price.  For the current period, it has certainly been a combination of the two, but to this point, it has been more centered on time than on price.  Click here to view Bespoke’s premium membership options.