The NFIB released its monthly reading on the sentiment of small businesses this morning. In the past, we have noted how the results of this survey are often correlated with political happenings. As such, the index dropped in the wake of the election but found a bottom in January.  Since then, it has remained weaker than during the Trump years, albeit it has also improved almost every month this year. That is except for the most recent month. May snapped a three-month winning streak with a slight decline from 99.8 to 99.6. 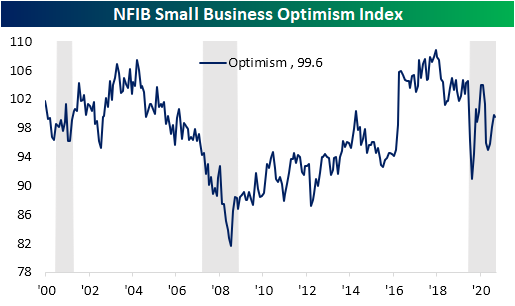 With the headline number slightly lower, breadth in the May report was fairly mixed.  Of the ten inputs to the optimism index, half were higher, two went unchanged, and three were lower versus April’s readings.  Three of those indices that moved higher—Plans to Increase Employment, Current Inventory, and Job Openings Hard to Fill—set new records. While it is not an input to the headline reading, the index for Higher Prices also rose to a new record high. Overall, the survey implied generally strong conditions with a few areas of concern: labor market tightness and inflation. 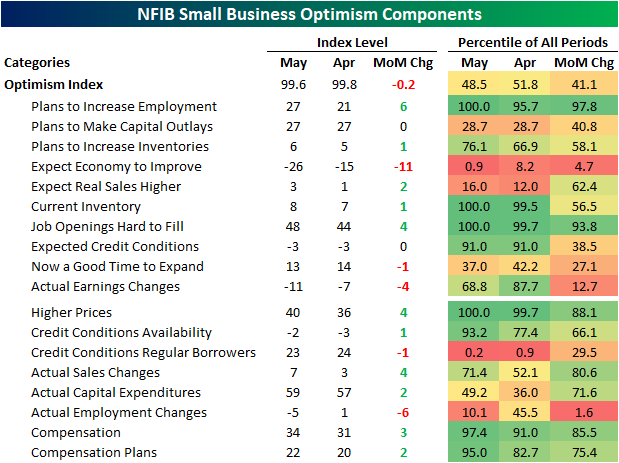 The report showed solid realized sales as the index of Actual Sales Changes rose 4 points to 7.  That marks a return to pre-pandemic levels. On net, a higher share of businesses also expects sales to continue to improve, although only at 3, the index is still at the low end of its historical range. In spite of the higher actual sales, a higher share of businesses are reporting worse bottom-line results versus the prior three months as the index for Actual Earnings Changes fell to -11.

In an attempt to make up for those weaker margins, a record share of businesses also are reporting that prices are higher than three months ago. A net of 40% of respondents reported that they are raising average selling prices; a record high in the data dating back to 1986. The NFIB noted that price hikes were most common for wholesalers (65% reported higher prices vs. 2% lower) and manufacturers (47% reported higher prices and 1% reported lower).  That is consistent with other data of the past few months showing prices are flying higher. Likely as a result of all of this in addition to other labor concerns (more on that below), the Outlook for General Business Conditions fell to -26, the lowest level since 2012 and in the bottom 1% of all months. Additionally, the share of businesses reporting now as a good time to expand ticked lower. 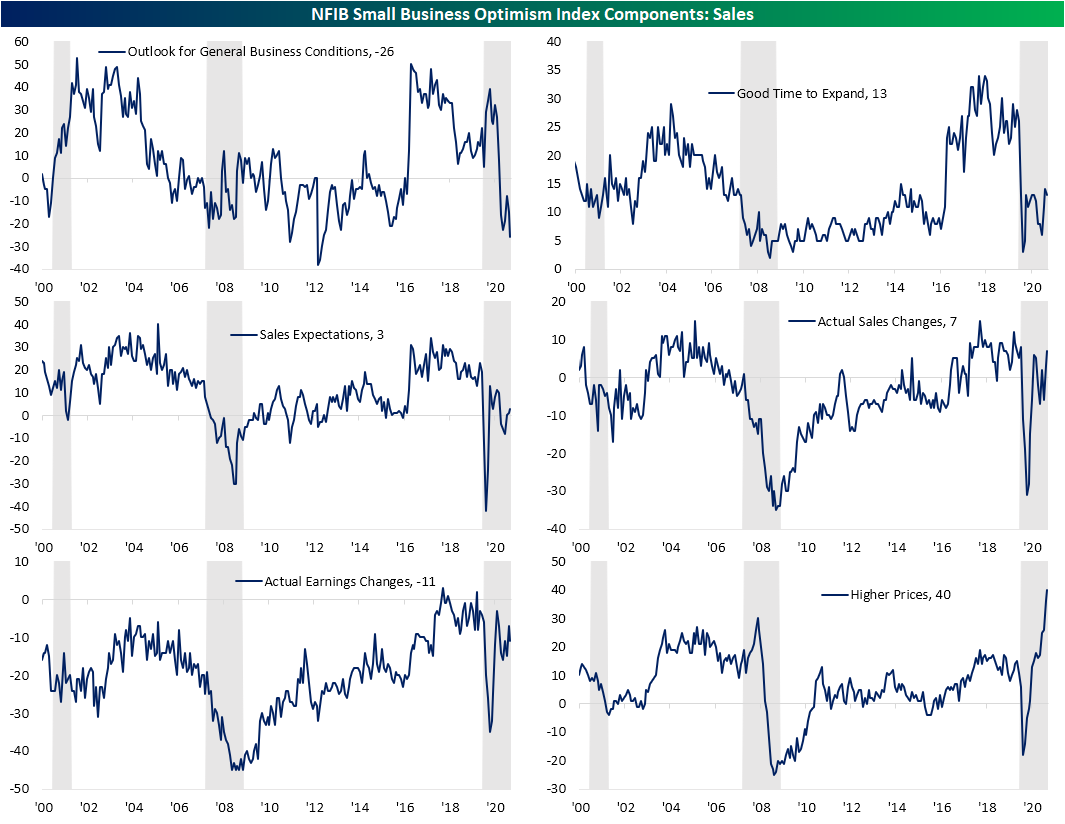 One major area of strength, at least in terms of demand, is employment. A net 27% of respondents reported that they plan to create new jobs within the next three months; surpassing the prior record high from August 2018 by a full point.  But even though businesses are putting the offers out there, on net fewer businesses reported an actual employment change. In fact, that index fell sharply by 6 points; a move that ranks in the bottom 2% of all monthly changes. Additionally, a record share of businesses reporting job openings as hard to fill as 34% of businesses report their biggest problem to be either the cost or quality of labor. That is indicating significant labor market tightness.  As a result, more businesses are or are planning to raise compensation with those indices at the highest levels of the past year and consistent with readings from 2017 up through the onset of the pandemic. Those higher costs are likely one reason for the weaker reading in actual earnings changes and higher selling prices previously mentioned. 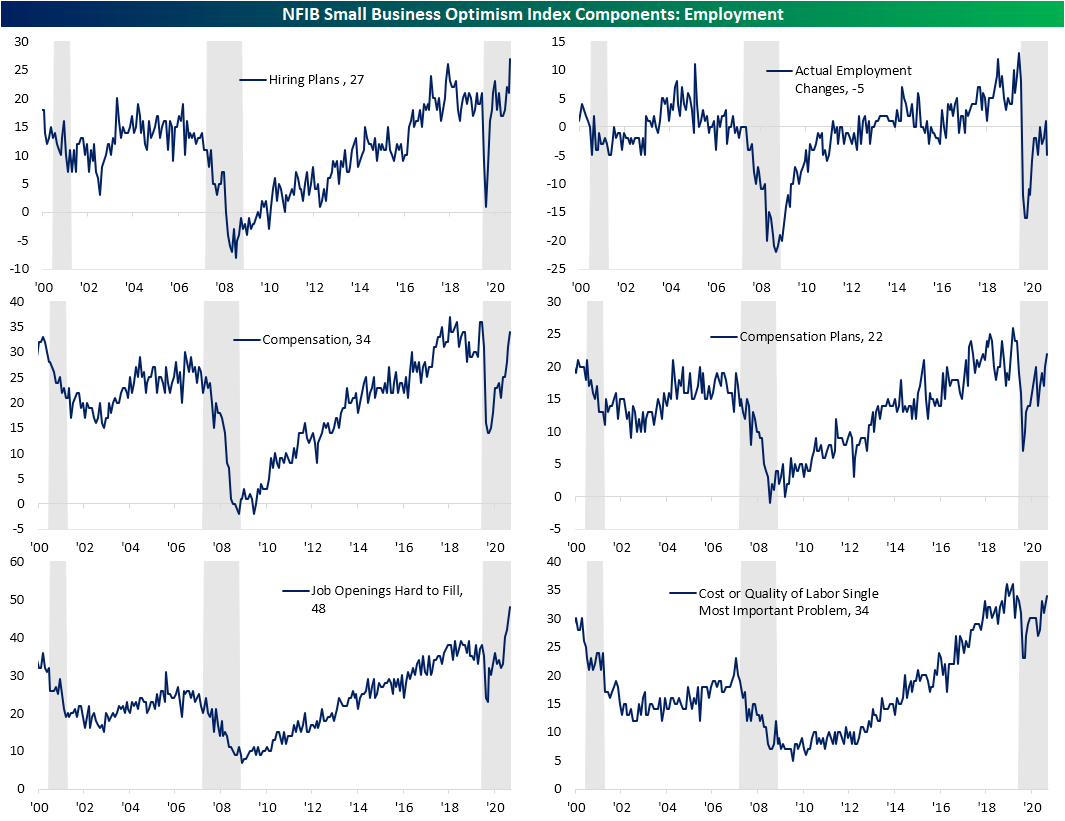 As for the other side of the production function, capital expenditures are not being raised in any sort of significant way nor are plans to increase expenditures. Potentially to get ahead of the strong demand and labor supply mismatch, businesses are raising inventory levels with a record share of businesses reporting that current inventory levels are “too low”.  Rising to 8, that index took out the joint high of 7 from last month and December.  Click here to view Bespoke’s premium membership options for our best research available. 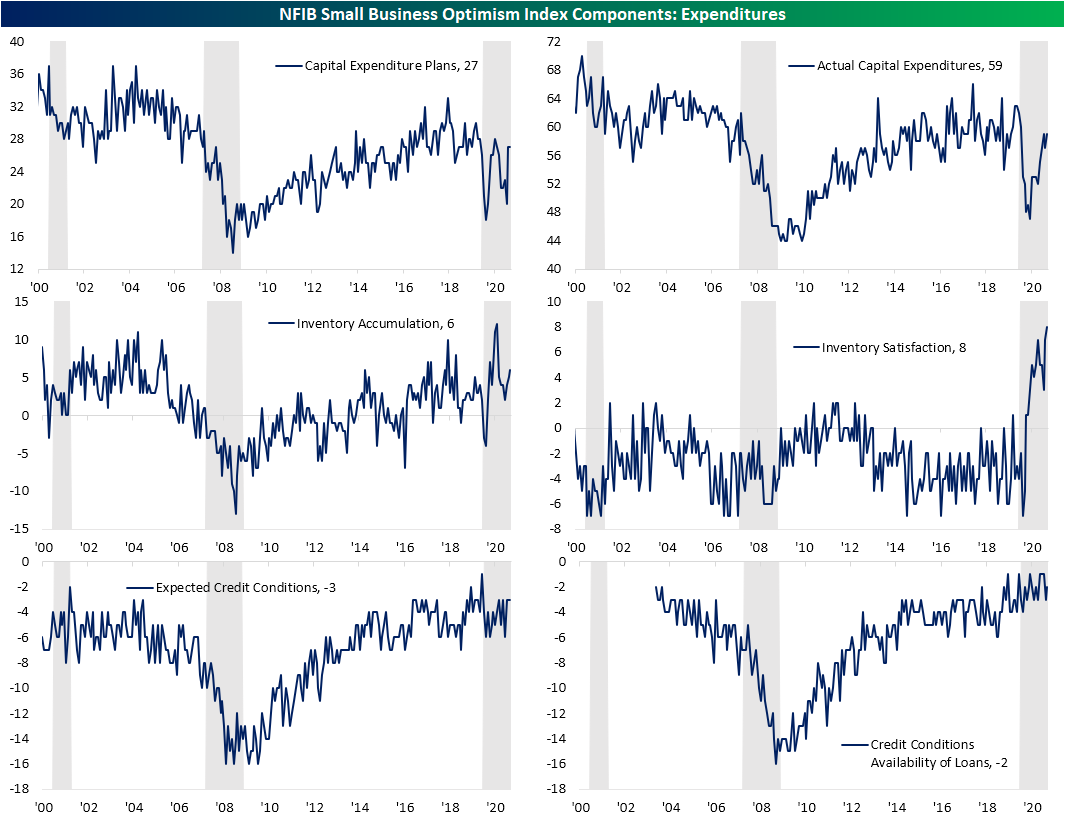