After crashing following the election, optimism on the part of small businesses remains pretty beaten down, though there was finally an improvement in February. The NFIB’s Small Business Optimism Index was expected to see a 2 point rebound in the month of February, but the increase was even smaller as the index rose from 95 to just 95.8. 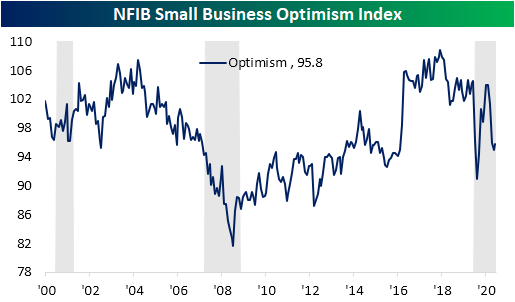 While small business sentiment is far from recovered, uncertainty has improved.  After spiking to a near-record high of 98 headed around the election last fall, the index for Economic Policy Uncertainty has continued to fall dropping to 75 in February. That 7 point month-over-month decline stands in the bottom 5% of all monthly changes which brings the index to the lowest level since last April. 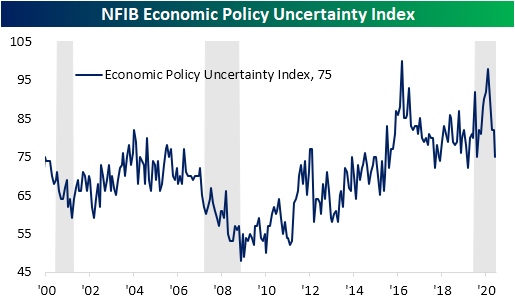 Breadth in the report was mostly positive with 10 of the 18 categories higher in February while another 3 went unchanged and the remaining 5 were lower.  Although most categories saw an improvement, several readings remain at historically low levels. For example, the indices for Expect Economy to Improve and Expect Real Sales Higher were both in the 3rd percentile of all readings. Other indices also remain at the low end of their historical ranges such as Plans for Capital Outlays and Now is a Good Time to Expand. 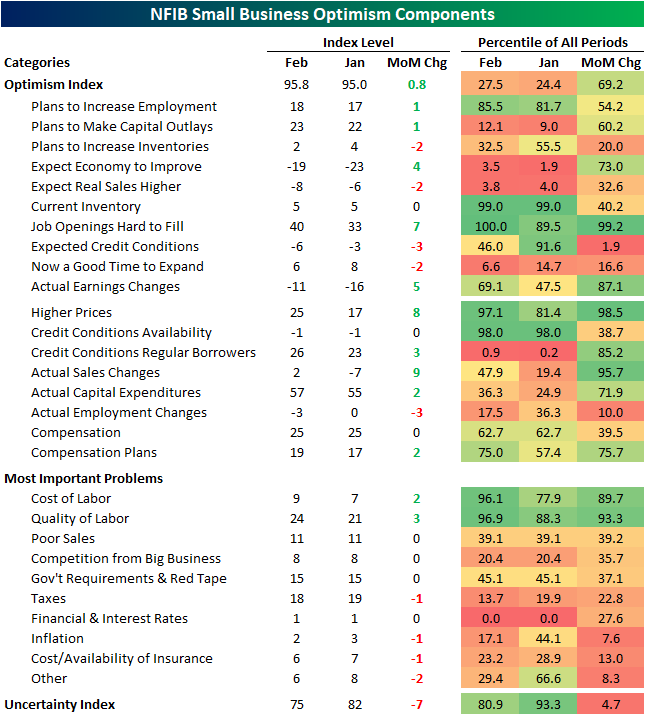 Sales metrics generally improved although firms reported as less optimistic for the future.  While sales expectations fell deeper into negative territory, small businesses reported higher nominal sales as that index rose 9 points from -7 to 2.  That was in the top 5% of all monthly moves and the first positive reading since November.  Additionally, the index for Actual Earnings Changes also improved rising 5 points to -11. Due to the strong pace of sales, a higher share of companies reported higher prices.  That index rose 8 points to 25.  That is the strongest reading for the index since August 2008. 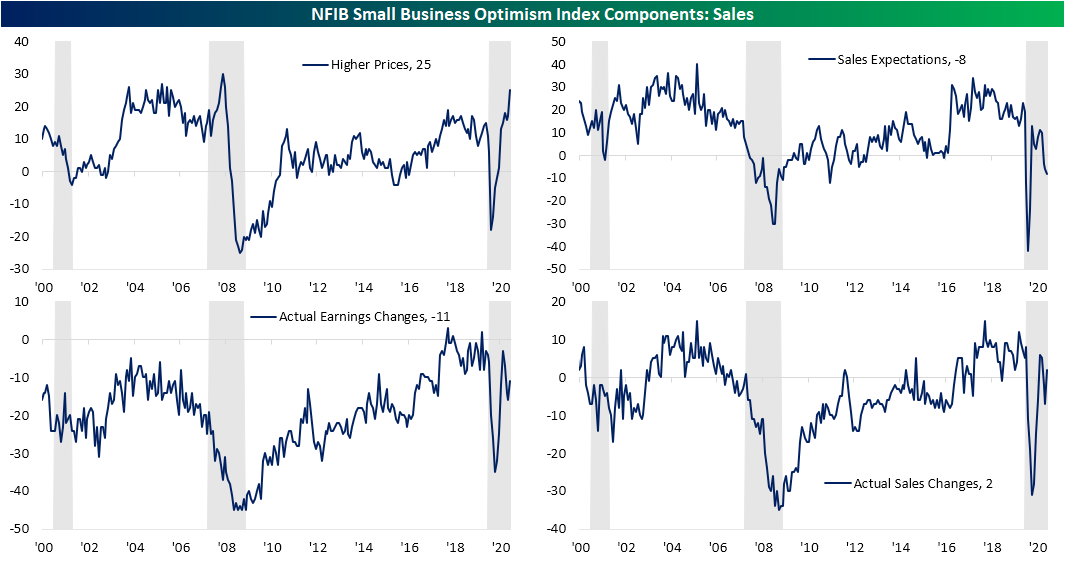 In addition to stronger sales, lower inventory levels also played into those higher prices.  The index of Inventory Satisfaction which measures how many firms report current inventory levels as “too low” was flat on the month in the top 1% of all readings.  Despite this, fewer firms report plans to increase inventories.  The index for Inventory Accumulation actually fell 2 points to the lowest level since May. 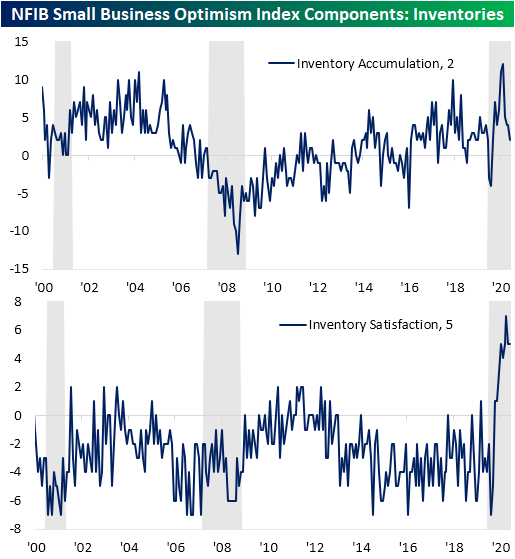 While small businesses do not appear to be making plans to increase inventories, they are investing in employment. The index for Hiring Plans rose slightly from 17 in January to 18 in February. Although that is off higher levels from earlier in the pandemic, it is well within the range of the past several years. Compensation Plans were also higher with the index gaining 2 points to 19. Even though firms appear to want to increase employment, they have yet to follow through with hiring.  The index for Actual Employment Changes remains negative falling further to -3 in February.  Meanwhile, the Compensation index went unchanged. The lack of actual increases to employment is not a demand problem but instead appears to be a labor supply problem. A record number reported job openings as hard to fill while 33% report either cost or quality of labor as the single most important problem for the business; up 5 percentage points from the prior month. That borrowed from firms reporting things like Taxes, Inflation, and “Other” as their biggest issues. Click here to view Bespoke’s premium membership options for our best research available. 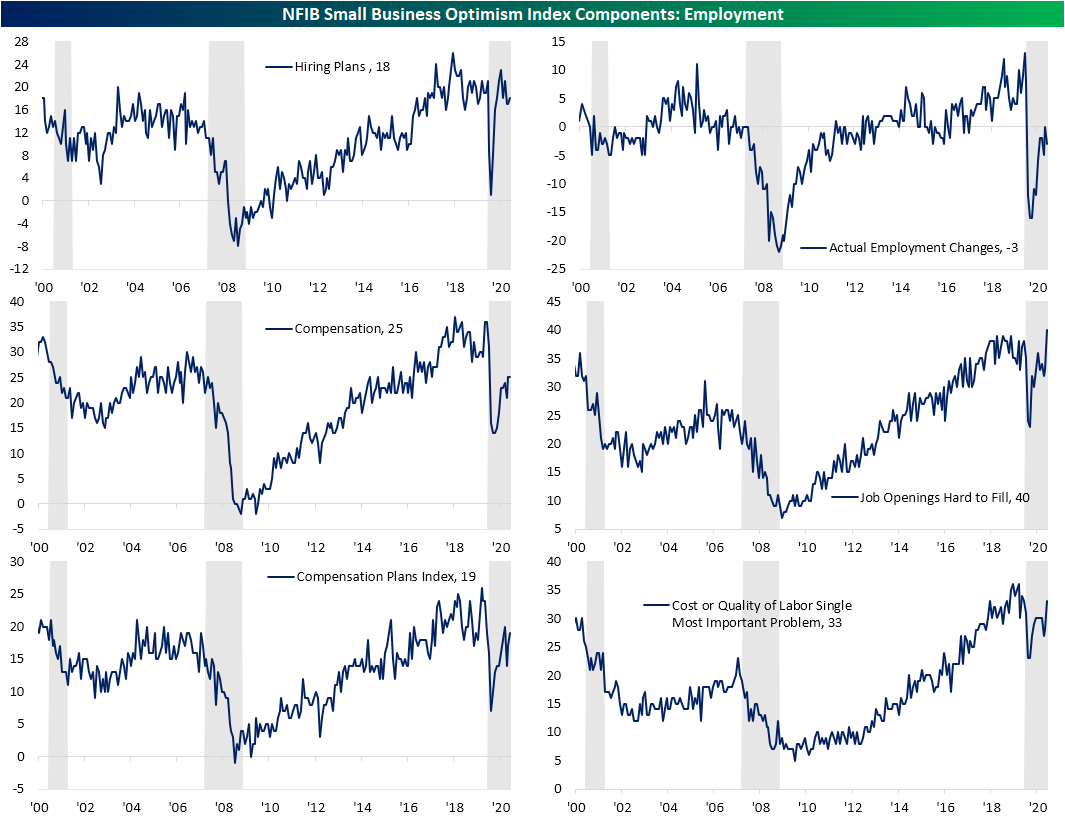