Today’s release of the December Small Business Optimism Index from the NFIB saw a large drop as the index dropped from 101.4 to 95.9.  After a sharp drop in the wake of the COVID outbreak, the index bounced back nicely but now looks like it’s really rolling over. 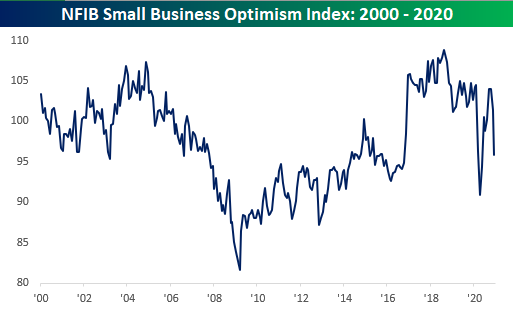 Not only was this month’s headline index weak, but it caught economists completely off guard. While the index fell to 95.9, economists were expecting a drop to 100.2.  That 4.3 spread between the actual and expected reading was the biggest miss relative to expectations in more than five years (July 2015) and was the third weakest reading relative to expectations since the December 2012 report.

Given the big drop in the headline index and the fact that it was so weak relative to expectations, should we be concerned about a double-dip?  As an investor, we should always be worried about what could go wrong, but in the case of this report, you can probably wait for further confirmation from other data.  The reason for the skepticism is that you could argue that politics plays a role in this report.  To illustrate this, we would note that going back to 2010 (as far back as we have data) and right up through Election Day 2016, the NFIB only topped expectations 42% of the time.  Following Trump’s election in 2016, though, this index surged and has since topped expectations 63% of the time.  Since Election Day 2020, though, the headline index has now missed expectations three times.

From a longer-term perspective, dating back to 1974, the average reading of the NFIB Small Business Index during Republican administrations has been 100.1 while the average level under Democratic Presidents has been 96.2. Now, that would make sense if the economy was also in a recession more often in those periods, but over that same span, even though the percentages are low for both political parties (<20%), the economy has actually been in a recession a higher percentage of the time during Republican administrations than it has in Democratic administrations.

The lesson to take from all this is that even if it’s often hard to separate when it comes to business or investing (or a lot of other aspects of our lives for that matter), it’s usually best to leave politics outside. Click here to view Bespoke’s premium membership options for our best analysis available. 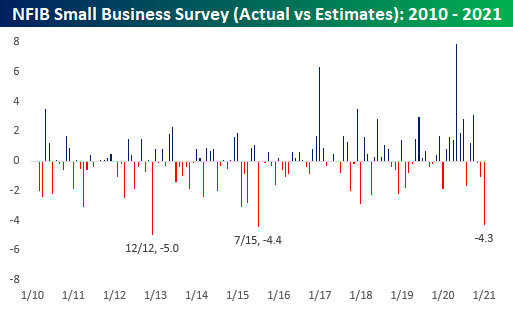