Small Business Optimism Back Below 100

Small business optimism measured through the NFIB’s monthly survey dipped in September by a full point to a six-month low of 99.1.  That is in the middle of the pandemic range as small business sentiment never quite fully recovered to pre-pandemic levels let alone its August 2018 record high. 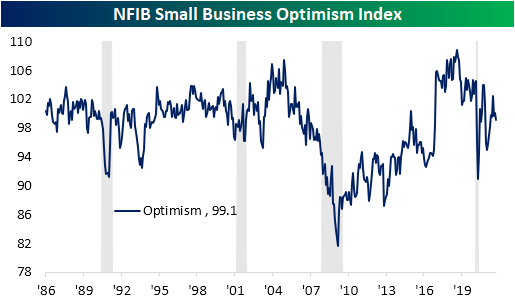 Breadth in this month’s report was mixed perhaps leaning slightly more negative with nine categories falling month over month while seven were higher. Another three went unchanged.  The largest declines were for plans to increase employment and expectations for the economy to improve.  While those were the two biggest decliners, they are coming from polar opposites of their respective ranges.  The index tracking plans to increase employment remains in the top 2% of readings even after the six-point decline that ranks in the bottom 2% of all monthly moves.  Meanwhile, the magnitude of the decline in the index for expectations for the economy to Improve ranks in the 20th percentile of all other monthly readings, but that leaves it just off of a record low. In other words, readings throughout the report are nuanced with some at or near record highs and others at or near record lows. 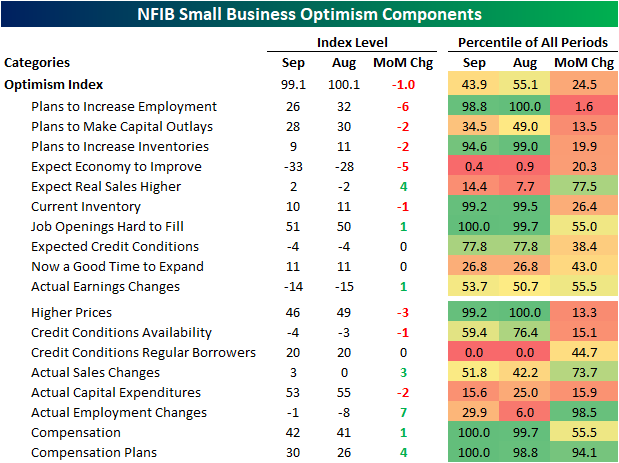 As previously mentioned, Outlook for General Business Conditions plummeted in September showing that a net -33% of reporting owners foresee better business conditions in six months.  The only two months with weaker readings on record were November and December of 2012 just after President Obama’s re-election. Given that weak reading, the number of firms that see now as a good time to expand remains muted with this month’s reading unchanged at 11 which is short of the bottom quartile of the historical range.  Actual sales changes improved back to a positive reading that sits in the middle of its range. Sales Expectations also improved to positive territory, but that reading is far lower with respect to its historic range. Earnings changes also improved as fewer businesses reported higher prices although that reading remains well above any other period in the history of the report. 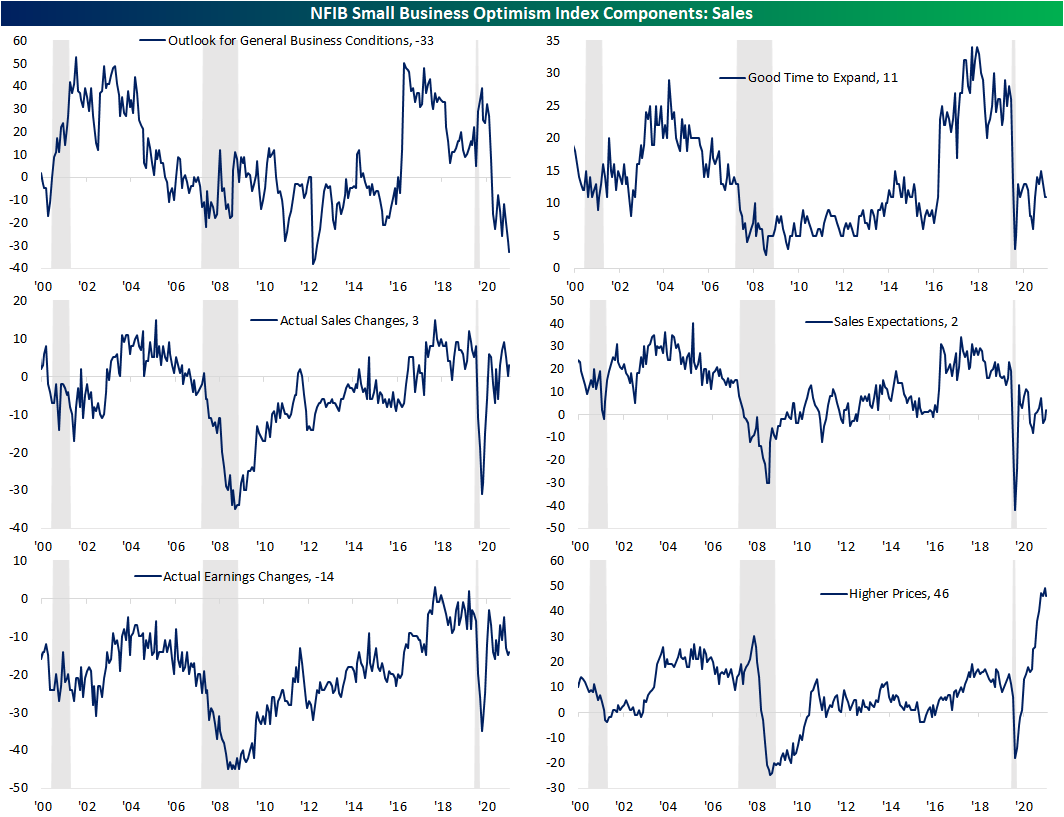 In today’s Morning Lineup, we discussed some of the price and labor pressures evident in the report.  Revisiting these, firms continue to show strong albeit slowing labor demand as hiring plans remain elevated but dropping sharply month over month.  Meanwhile, Actual Employment Changes rose sharply, though, this reading remains negative. Additionally, firms have continued to raise compensation and plan to continue to do so as a record number reported that openings are hard to fill. 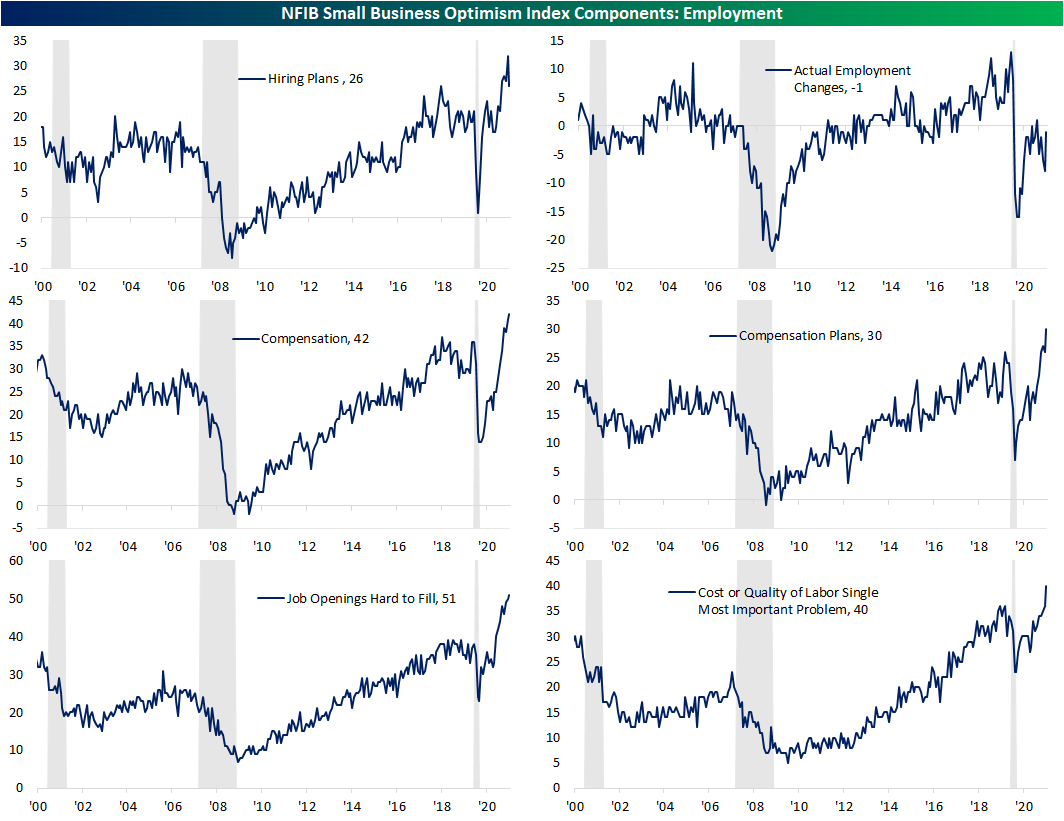 Not only did plans for employment fall but so too did capital expenditure plans as well as actual capital expenditures.  Inventory levels are also abating to a degree as fewer—but still a historically high share—report current inventory levels are too low. There was also a 2 point pullback to 9 in the net percent of businesses looking to increase inventory plans. Click here to view Bespoke’s premium membership options. 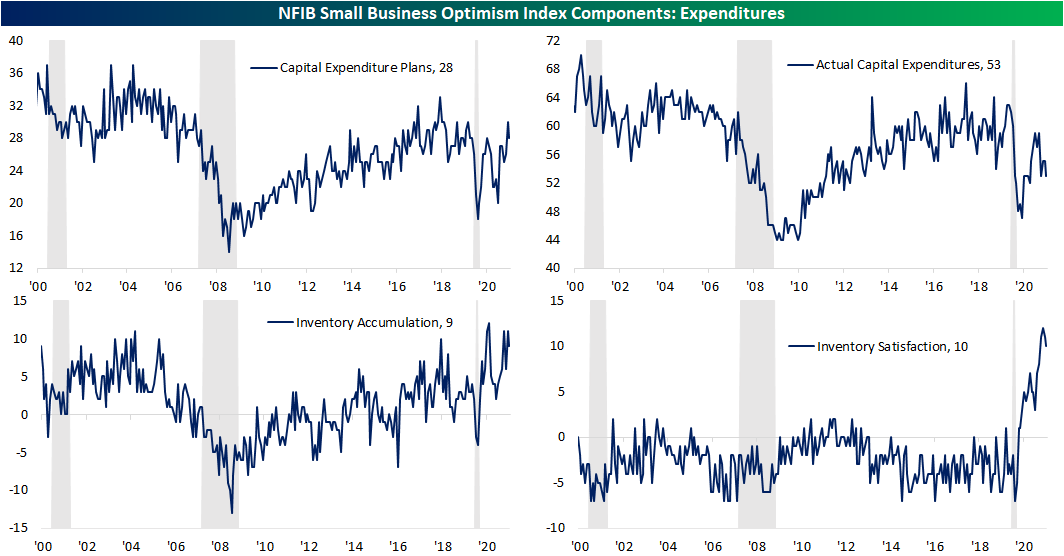